To help you make the most out of a visit, I’ve compiled a packing list as well as sections on what to wear in Sri Lanka, what NOT to bring, and answers to FAQs. Overall you should be prepared to get wet, to be active as well as relax, and to appreciate beauty comfortably and respectfully.

What to Pack for Sri Lanka - 17 Essentials

Other Sri Lanka packing list items NOT to forget

What to wear in Sri Lanka

For your wardrobe in Sri Lanka, keep in mind tropical heat, comfort, and respect. Sri Lanka is warm and tropical, and you should dress accordingly in clothing that is cool and breathable. The highlands are slightly cooler, so you will need long sleeves, but you still don’t need to bother with packing warm winter wear as the weather does not dip below 60°F (15°C).

Depending on what you’d like to do on the island, include in your packing clothes for the beach, hiking, casual urban excursions, and temple visits. Sri Lankans tend to dress fairly conservatively, so don’t be too showy and leave revealing clothing behind. Opt for lightweight longer shorts or pants to get you by most days. Generally, men and women should dress comfortably, casually, practically, and respectfully in Sri Lanka. 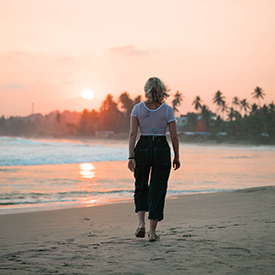 What WOMEN should wear in Sri Lanka – (Click to expand)
Below is a sample women’s clothing list. (All items link to Amazon.com for your convenience).

While on beaches and in touristy coastal towns it’s more acceptable to wear shorts, beach dresses and shorter sleeves, elsewhere in the country you should generally cover your arms and thighs with loose-fitting, cool and breathable clothes. Loose-fitting blouses are perfect, whereas tight and revealing clothing may make you stand out in an unwanted way. If you plan on hiking or other outdoor activities, be sure to bring lightweight hiking pants, hiking boots, and a sweat-wicking t-shirt for the sun and humidity. A rain jacket and quick-drying clothes are a plus, as rain can be unpredictable and heavy. In the highlands, you’ll need boots or hiking sandals, but everywhere else you can wear flip flops.

What MEN should wear in Sri Lanka? – (Click to expand)
Below is a sample men’s clothing list. (All items link to Amazon.com for your convenience).

Men should pack beachwear, activewear, and casual clothes for days out. Because Sri Lanka is so hot, clothing that is breathable, lightweight, and loose-fitting is most comfortable. While men can wear shorts, it’s often better to wear comfortable long pants, as locals generally wear jeans or pants rather than shorts. At religious sites, men, as well as women, need to cover their shoulders and legs down to below the knees. Beaches and touristy coastal towns are more permissive, but it’s always best to wear clothing that is respectful, casual, and comfortable. In the highlands, men will be comfortable in hiking boots, sandals, or closed shoes, but anywhere else flip flops are fine.

Packing for the Seasons in Sri Lanka

Sri Lanka has two separate monsoon seasons, affecting seperate parts of the country. The southwestern monsoon hits the southwestern quarter of the country including Colombo and Galle, and occurs from May to July. Meanwhile, the Northeastern monsoon hits the northeast of the country, including Arugam Bay, from October to January. The monsoons don’t hit the central highlands, but June through November are the wettest months. The monsoons don’t affect temperatures much, which remain between 77-86°F (25-30°C) throughout the year, but if you travel in the monsoon, prepare to be very, very wet. Make sure to wear your rain jacket ( women:men) hiking sandals that dry quickly and have good grip (women:men) and quick drying clothes Because the monsoon season hits different parts of the country at different times though, it’s best to avoid them altogether and simply travel where it’s dry. There’s not much fun in visiting a beach, anyway, if it is constantly dumping rain.

The dry season in the southwest is December to April, while the dry season in the northeast is May to September. Coastal temperatures sit all year between 77-86°F (25-30°C). The central highlands, meanwhile, are driest between January and March, and temperatures can dip down to 60°F (15°C) though it tends to stay between 74-78°F (23 – 26C). The central north, including the ‘cultural triangle’ of Dambulla, Sigiriya, and Minneriya is quite dry all year, with more rainfall in November and December.

There are two intermonsoon seasons that affect the entire island. The first is in March and April, and the second is in October and November. The inter-monsoon seasons can bring thunderstorms and heavy rain, so be prepared with a rain jacket (women:Men), hiking sandals that dry quickly and have good grip (women:men), and quick drying clothes.

Dressing appropriately for the activity – (Click to expand)
Hiking and Safari: For hiking in the central highlands or a safari at one of the national parks, plan to wear active clothing that is practical and keeps you cool, including hiking shorts or pants, hiking boots with good grip for muddy hills, hiking socks to protect from leeches, a sweat-wicking shirt, and a hat for protection from the tropical sun. If you climb to Adam Peak before sunrise, it is chilly at the top so bring a warm layer like a lightweight compact jacket.

Beaches: At the beach you’ll be comfortable in flip flops, a beach dress, or board shorts. Sri Lanka has great waves for all skill levels, and if you surf, a rashguard will protect your skin from both the board and the sun. When you’re off the beach and in town, wear cool and comfortable pants or shorts and a t-shirt or blouse. In beach towns, it is more common and acceptable to show legs and arms.

City: For urban excursions in cities like Colombo, Kandy, and Galle, plan to dress comfortably in lightweight clothing that covers your shoulders and thighs. You’ll be comfortable walking around the city in sandals or lightweight closed shoes. If you visit Jaffna and the north, keep in mind that it is more conservative so both men and women should always wear long pants and long sleeves.

Temples and sacred sites: When visiting Sri Lanka’s temples and sacred, religious, and cultural sites, make sure you dress appropriately in clothing that covers your shoulders and knees. You may want to bring a sarong to wrap around your shoulders or legs. Keep in mind that you are also often required to take off your shoes, so bring socks if you don’t want to walk in bare feet.

What NOT to bring to Sri Lanka

What NOT to wear in Sri Lanka – (Click to expand)
Leave behind any clothing that is tight-fitting, revealing, uncomfortable, bulky, or too warm. Sri Lanka is mostly casual, so you also don’t need to bother bringing fancy or showy clothes. Dresses, skirts, or shorts that are very short will set you apart from the locals, who generally dress more conservatively. You’ll likely be hot in heavy materials like denim or leather, so opt for lighter clothing where possible.