Info on power adapter plugs for the Netherlands

The Netherlands is a tiny country with a big reputation, known for everything from its renowned art and architecture to its attitude toward marijuana to its world-famous canals. From the streets of Amsterdam to the quaint villages in the countryside, there’s plenty to do in the Netherlands. Just make sure you pack all the essentials, including devices like your phone and Kindle, as well as a US to Netherlands power adapter to plug them all in.

Which power outlets do they use in the Netherlands?

The Netherlands has two different types of electrical outlets, Type C and Type F. Both have two round holes, and they differ in that Type C is ungrounded while Type F has grounding clips. You’ll find both types in Amsterdam and throughout the Netherlands. Any plug type with two round pins will work in the Netherlands, including the Type E plugs commonly found in France. Sockets of any type in the Netherlands are usually set into a round indentation in the wall (unlike in the US, where outlets are flush against the wall).

Unlike the US, but like most other countries in Europe and elsewhere, the Netherlands uses a voltage of 230V and a frequency of 50 Hz.

What kind of power adapter do I need for the Netherlands?

While packing for your trip, you’ll probably be asking, “What plug do I need in the Netherlands?” Since the US uses a different outlet type than the Netherlands, you’ll definitely need to bring an adapter with you. A US to Netherlands power adapter can have either a Type C, Type E, or Type F plug; it just needs to have two round pins.

This recommended Universal Adapter fits all of these requirements and will reliably charge all of your personal electronics (laptop, mobile phone, tablet, camera) not only in the Netherlands but in over 100 other countries around the world.

What’s the electricity and power supply like in the Netherlands? 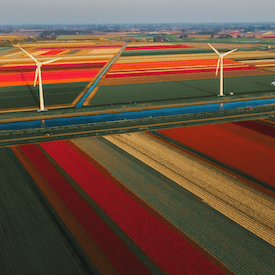 The Netherlands is among the most developed countries in the world, and its electrical infrastructure is no exception. By 2030, solar and wind are expected to have a cumulative share of over 60% of the total capacity, while coal power generation is expected to be phased out by 2028.

Both in cities like Amsterdam or Rotterdam and in more rural areas, power outages are exceedingly uncommon. While outages happen very occasionally due to accidents, you’re extremely unlikely to encounter one while visiting.

Do I need a voltage converter for the Netherlands?

To safely use electronic devices in the Netherlands, they need to be rated to 220V-240V. Even though the US’s electrical grid only operates with a voltage of 110V-120V, many US-made devices are actually rated much higher. Things like phones and laptops will not require a voltage converter in the Netherlands or elsewhere because they are dual voltage. However, certain American appliances are rated only to around 110V-120V, including curling irons, hairdryers, and electric razors. If you want to bring any of these items on your trip, you’ll need to use a voltage converter. Do not plug one of these devices into the wall without it – it’ll destroy the device, and it could shock you or cause a fire.

In addition to your US to Netherlands power adapter these items will help you on your travels:

Other FAQs about traveling in the Netherlands