A lot of people were asking me, “What should I pack for India?” so I wrote this complete India packing checklist.

Below are my top 18 “must-take” items and I also have an important section on what to wear in India which I hope will make your next trip safer and more enjoyable. At the bottom I also include a list of what NOT to bring to India.

In addition to all these physical items be sure to also bring: plenty of patience, an open heart & mind, a healthy sense of humor and an adventurous spirit! 🙂

What to Pack for India – 17 Essentials

I also recommend you bring digital copies of all your important documents, including passport, visa, driver’s license, bank info, and credit cards. Just in case. A simple way to do this is scan or photograph them and then email them to yourself.

What to wear in India?

For both men and women, the main rule in this very conservative country is to avoid flaunting bare skin as much as possible. Of course, things are more lax in tourist hotspots like Goa and Varkala, but it’s still more respectful to tend toward modesty. 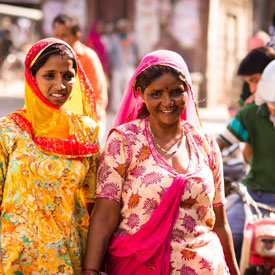 What should WOMEN wear in India as respectful tourists? – (Click to expand)
Below is a sample women’s clothing list. (All items link to Amazon.com for your convenience).

City wear/everyday wear: In Mumbai and Delhi, Western dress is perfectly acceptable. You’ll see as many Indian women wearing jeans and t-shirts as saris. The case for covering up is the same, though – it’s best not to wear clothes that are tight or revealing. Go for light, comfortable clothing.

Temple Wear: Covering up is not just recommended here – it’s essential. Many temples have a dress code, and won’t allow you entry unless your head AND shoulders are covered. In 2016, Madras actually enforced a ban on all western clothing in temples, refusing entry to anyone wearing jeans, shorts, skirts, short sleeves or tight leggings.

Your best bet is a long, loose skirt (calf or ankle length) and a plain, long-sleeved top or shirt. If you don’t have long sleeves, a long scarf draped over your shoulders should be fine. Wear shoes that can be easily removed, as you’ll be leaving them at the door anyway.

If you want to be really respectful, then a Kameez top or a full Sari will be the best received. This is what Lyric (my wife) wears when in India.

What should MEN wear in India as respectful tourists? – (Click to expand)
Below is a sample men’s clothing list. (All items link to Amazon.com for your convenience).

City wear: Dress is less strict for men, but it still pays to be modest. Dress according to the season.

Temple wear: Covering your arms and legs is just as important for men as it is for women. Don’t wear jeans or other western items such as leather belts. Loose cotton pants paired with a respectable shirt should be sufficient but if you really want to be respectful, wear a white Indian kurta/pajama set. I like to wear a dhoti (cloth wrapped around waist extending to ankles) when I go to temples.

Going out: Western dress is pretty safe for foreign men but shorts may be frowned upon if you’re going to a nice place.

Packing for the Seasons in India

Winter is, logically, the coldest and best time of year to visit most parts of India (though temperatures are much warmer in South India). Dress according to how comfortable you’ll be in the temperatures, and plan to bring appropriate cold weather gear if you’re in the North (hats, gloves, light jacket or fleece) as appropriate for the activities and elevations you’ll be experiencing. Temperatures in the north (Delhi) average between 45°F to 75°F (7°C to 24°C), and in the south (Kochi) between 73°F to 90°F (23°C to 32°C).

This is by far the hottest time to visit India, and believe it or not it can be a dangerous time. April and May are the hottest months, and can bring some interesting weather.

The north can get intense pre-monsoon storms which carry hail, and the famous Loo winds blow in the north during the summer.

The intense heat can cause people to get sunstroke and it’s advised to never go out in the midday sun. 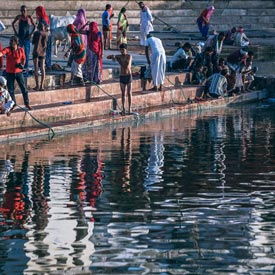 When packing for India during the summer, be very sure to do your research about the specific regions you’ll be visiting and staying in. Pack light, quick-drying clothes and items that can cover you for sun protection while keeping you cooler – think long-sleeved linen shirts, quality sun hats, linen pants, sunglasses, etc. Temperatures in the north (Delhi) average between 80°F to 102°F (27°C to 39°C), and in the south (Kochi) between 80°F to 90°F (27°C to 32°C).

As you might guess, Monsoon season is very wet. Monsoon rains are what drive India’s agriculture-based economy, so it’s a very important, albeit soggy, time of year for the country and its inhabitants.

Rains move in from various directions, and by July almost the entire country is experiencing storms and downpours, and a fair amount of flooding. If you’re visiting during Monsoon season, plan to bring high-quality rain gear and quick-dry layers. 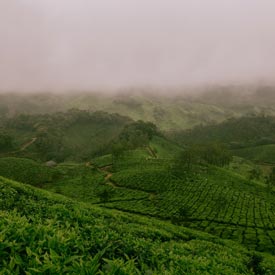 During Indian autumn, drier and cooler air spills across the Himalayas and clears the skies, bringing the sun back into the picture. This is a windy season, so layers are important, as the wind can bring uncertain temps in some parts of India. Many areas experience lingering, dwindling precipitation, so you should absolutely plan to have rain gear and a windproof umbrella on-hand. Temperatures in the north (Delhi) average between 60°F to 90°F (16°C to 32°C), and in the south (Kochi) between 75°F to 88°F (24°C to 31°C).

What NOT to bring to India

FAQs about travel in India

After 10 years of work, we have just released Travel India Safely. In this 13 lesson video course, we teach all our “secrets” to traveling India smarter and safer (and without getting sick or scammed!)… It’s based on a decade of traveling India, tips from other expat experts living 15+ years in India, countless hours of research, and much more…
If you have any questions or concerns about your upcoming trip and want to be fully prepared then this is the course for you. It also comes with a private Facebook support group where you can ask unlimited questions like, “how do I get train tickets?”, “how much should I tip my tour guide?” and “what’s the pollution like at night?” etc.
Learn more at TravelIndiaSafely.com ➜ 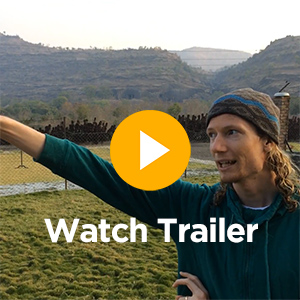