Iceland is often referred to as “The Land of Fire and Ice” due to its geological extremities. While it has some of the largest glaciers in Europe, it is also home to the world’s most active volcanoes. Iceland’s varied climate and extreme landscapes make it the ultimate travel destination for nature lovers. The country is filled with hot springs, lava fields, geysers, canyons, glaciers and is surrounded by ocean. The capital city of Reykjavik is a friendly and colorful city with an exciting nightlife and home to a bustling music and art scene. Iceland is a country unlike any other and has healing energy that leaves many travelers in awe.

Which power outlets do they use in Iceland?

The power outlets used in Iceland are Type F. This type of outlet is recessed; meaning the faceplate of the outlet is deeper in the wall. Type F outlets and are round with two small holes that fit a Type F electrical plug (also known as a Schuko plug). The Type F plug fits into the outlet has two 4.8mm round pins spaced 19 mm apart. The Type F outlet and plug type are commonly used in Northern European countries. Type C plugs are also used in Iceland and are similar in appearance to Type F, although they are being switched out more and more for Type F.

Electricity in Iceland is 230 Volts with alternating electric currents of 50 cycles per second (50 Hertz).

What kind of power adapter do I need for Iceland?

If you’re traveling from the U.S. you’re probably wondering, “What plug do I need for my trip to Iceland?” The plugs on your U.S. devices will not be compatible in Iceland, so you will need an adapter.

We recommend this high quality Universal Adapter because it will have you covered on your trip throughout Iceland and over 100 countries around the world. It will reliably charge all of your personal electronics including mobile phones, tablets, cameras, laptops etc.

What’s the electricity and power supply like in Iceland? 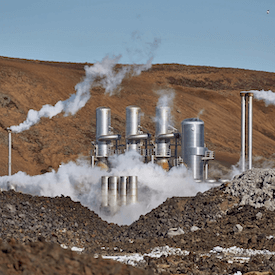 One of the unique features of Iceland is that it produces all its electrical power through renewable energy. Iceland uses a combination of hydroelectric, geothermal and wind power! 75% of electricity production in Iceland is derived from hydropower, making hydro Iceland’s main source of clean energy. A report by the United Nations states, “Iceland is a strong example of how renewable energy can power a modern economy.”

Although Iceland is not a densely populated country, it is connected to a power grid that is rated as one of the most reliable in the world.

The grid is highly modern and is constantly being developed and maintained at a high standard. Iceland frequently rebuilds older lines and adds new ones to ensure maximum efficiency. Blackouts are extremely rare and in cases, there have been blackouts they were due to weather and occurred in smaller towns. Iceland runs off a 230V supply voltage and 50 Hz.

Do I Need A Voltage Converter In Iceland?

Prior to traveling to Iceland, take inventory of which electronic devices you will be bringing. Most devices list the voltage range on the back or bottom so be sure to check the range to determine if you need a voltage converter. A power adapter can only adapt to the shape of the plug for Iceland and is unable to convert power to a higher voltage. If you wish to safely use any 100-120V appliance, that is not dual voltage, you will need to bring a voltage converter to Iceland.

Most commonly used electronic devices such as laptops, tablets, cell phones, and cameras are dual voltage and will not require a converter, however, it is always important to check the power label. High powered electronics such as hairdryers and straighteners are not usually dual voltage so be sure to check the voltage settings to see if a converter is required. It is important to note that voltage converters are not always reliable and there is always a risk you could fry your device or a power outlet.

In addition to your US to Iceland power adapter these items will help you on your travels:

Other FAQs about traveling in Iceland: