People often ask me, “What should I take on my trip to Thailand?” so I put together this essential checklist.

I also include what to wear in Thailand as well as additional tips on what NOT to bring and some frequently asked questions about general Thailand travel.

In addition to all these physical items definitely make sure to also bring an open heart and mind, patience, a balanced sense of humor, and an adventurous spirit!

What to Pack for Thailand – 18 Essentials

What to wear in Thailand?

Thailand is a country known for incredibly hot and humid weather. Much of Thailand is fairly conservative, especially in the countryside and away from the tourist hotspots. Islam is prominent in much of southern Thailand, where headscarves are more common than shorts among locals. Even in laid-back beach towns, swimwear should be saved for the beach.

No matter where you are, choosing the right fabrics can help you stay cooler in Thailand’s tropical climate. Clothes made from thin, lightweight materials like linen, cotton blends, and active fabrics are best – avoid heavy denim. 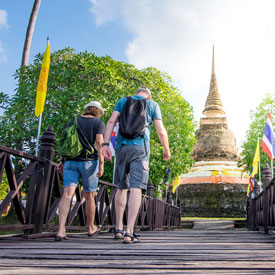 What should WOMEN wear in Thailand? – (Click to expand)
Below is a sample women’s clothing list. (All items link to Amazon.com for your convenience).

Shorts, tops, skirts, dresses, and capris made out of lightweight fabrics can all be good options for women visiting Thailand. On the other hand, denim is one of the worst fabrics for hot climates, and while denim shorts aren’t too bad, full-length jeans are uncomfortable and take forever to dry. Lighter-weight pants or capris are a much better option for your Thailand wardrobe.

Like most places, social norms regarding how to dress in Thailand definitely put more restrictions on women than on men. Even in beach towns and large cities, women should cover their midriffs and avoid super-short shorts and skirts. But in general, Thai clothing reflects Western fashion, and visitors to Thailand can wear similar styles as at home. Just err on the side of lighter fabrics and a little more coverage.

What should MEN wear in Thailand? – (Click to expand)
Below is a sample men’s clothing list. (All items link to Amazon.com for your convenience).

Shorts, pants, and short-sleeved shirts made from lightweight fabrics are the best clothes to wear for men in Thailand. Again, jeans are not a great idea in a climate this hot – pants made from linen or a cotton blend will be much more comfortable. As long as you’re wearing a shirt (and not an open button-down with nothing under it), the Thailand dress code for men is pretty lenient.

Thai men mostly wear Western clothes, so the styles you wear at home are generally acceptable. That said, Thais dress more formally than you might expect, especially in the cities, and Thai men are more likely to wear pants and a collared shirt than shorts and a t-shirt. But the most important thing for male visitors is that singlets or other too-revealing tank tops should not be part of your Thailand wardrobe (regardless of how many other tourists you see in one). Slip-on shoes like loafers are most convenient for removing at businesses and will also keep your feet cool.

Packing for the Seasons in Thailand

Heat climbs quickly and is quite oppressive due to the dense humidity in this region. Rains happen occasionally and only add to the humidity. You’ll want light, quick-dry fabrics, comfortable sandals that strap on, a good sun hat, cute sunglasses, and plenty of sweat-resistant (and reef-safe!) sunscreen.

Visiting temples always requires fairly modest attire, so plan to bring lightweight items like linen shirts, linen pants, and maxi-skirts to cover you up but allow you to stay cool at the same time. 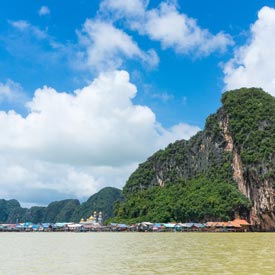 Hydration is also key, so bring a water bottle to ensure you always have a supply of safe drinking water! Temperatures average between 85°F to 90°F (29°C to 32°C) with April and May being the hottest months.

Heavy rains and rough seas are typical of this season. In some parts of Thailand, rains come in heavy spurts and go as quickly as they come. In other parts, you’ll see longer, somewhat mild storms that can last for days.

Flooding is common regardless of area, and the temperature is still quite warm – humidity makes it feel warmer! Wet season timing can vary from year to year, so be sure to do some research and look at the forecasts before you go. 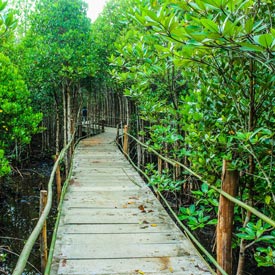 You will absolutely need a windproof umbrella and a dependable rain jacket. You should also plan to bring a couple of pairs of shoes – waterproof hiking shoes are great, and sandals that strap on snugly and can be dried quickly are also a good idea. Temperatures average between 80°F to 90°F (27°C to 32°C).

In several areas of Thailand, the temperatures will drop a bit during this season, and drier air will move in. Don’t expect it to be too cool, though, unless you’re at a higher elevation and further north for an extended period of time.

As always, it’s a good idea to look up the forecast to get a ballpark temperature estimate for the area you’ll be visiting.

Everyone reacts to temperatures differently, so you’ll want to pack according to your comfort level in the expected temps, and bring a rain jacket just in case. Long-sleeved, lightweight shirts are great as long as they can dry quickly.

Linen pants are perfect, and good walking shoes are always crucial. You’ll still have plenty of sun, so be sure to pack a sun hat, sunglasses, and sunscreen! Temperatures average around 78°F (26°C) in most areas, with a colder snap for about a week in December. 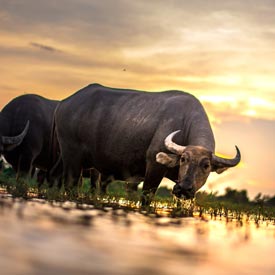 How to dress for activities in Thailand – (Click to expand)

Visiting Temples – The Thailand dress code is perhaps more important for visiting temples than anything else. Temples are sacred to Buddhists in Thailand and are generally active places of worship and spiritual study. Revealing clothes are considered extremely disrespectful in these locations, and you’ll likely be turned away if you’re not dressed properly. In general, both men and women need to cover at least their shoulders and knees. Men should wear pants, and women can wear capris or longer skirts or dresses. T-shirts are acceptable, but sleeveless tops are not, though women can cover bare shoulders with a scarf or shawl.

Hiking/Trekking – Thailand has lots of great hiking and trekking options, and the same clothing you wear for outdoor activities at home will probably work. The key is to wear clothes made from sweat-wicking fabrics, which will keep you more comfortable on the trail. They’ll also dry quickly if you get splashed at a waterfall, and they usually don’t take up much space in your bag. Despite the heat, you should definitely wear pants when hiking in Thailand. Brush and leaves and all manner of biting insects will be kept at bay by a good pair of quick-dry hiking pants. Opt for ventilated hiking shoes so that your feet won’t get too hot.

Diving, Snorkeling, or Surfing – What’s a trip to Thailand without getting into the ocean? It’s home to some of the best – and cheapest – diving in the world, and has a few up-and-coming surfing spots as well. Though most people just wear a swimsuit for snorkeling, many of them end up with very sunburnt backs, so a rash guard is a really good idea. You’ll definitely want a rash guard for surfing, and probably a wetsuit for diving. While most surf and dive shops provide attire, it’s definitely better to have your own.

What NOT to bring to Thailand

What NOT to wear in Thailand – (Click to expand)
The most important part of the Thailand dress code is not to show too much skin. Even in Bangkok or beach towns, women should avoid short-shorts and miniskirts or mini dresses. Crop tops, low-cut shirts, and shirts that leave the bra mostly exposed are also inappropriate.

The cutout tank or “singlet” tops the list of what men shouldn’t wear in Thailand (especially away from the beach), though the same goes for unbuttoned shirts without anything underneath. Both men and women should also refrain from wearing just swimsuits unless they’re on the beach.

The second most important thing is not to look too grungy. Thai clothing generally isn’t that much different from what you’d see back at home, and many people are just as fashion conscious. They also often dress more formally than you might expect, especially in Bangkok, but in other areas as well. Travelers should keep their clothes clean, and overly casual outfits should be avoided.

FAQs about travel in Thailand