New York City receives over 60 million tourists every year, and it’s because of the full-on sensory and cultural experience it offers. But it can also mean having to deal with crowds and lines, getting stuck in traffic, and encountering unexpected sights, sounds, and smells. But it’s all worth it to experience the Big Apple.

This New York City packing list includes the essentials like what to bring, what to wear in NYC, what NOT to take, and some FAQs for your trip. Make sure you bring a healthy dose of patience with you, and you’ll come home saying, “I ♥ NYC!”

What to Pack for New York – 22 Essentials

Other New York City Packing List Items Not to Forget

What Should I Wear in New York?

New York is a progressive and diverse place where you never know what you’ll see – so in that sense, you can wear almost anything. But if you don’t want to stick out as a tourist, opt for dark jeans and black or solid-color staple clothing items, and dress a bit nicer than you might at home.

Blouses, sweaters, and dresses are all good choices for women, and guys might choose polo-style shirts or button-downs and a sport coat. You’ll want lightweight, breathable clothes during the humid summer months, and a warm coat and gloves in the winter. No matter when you visit, an umbrella and some comfortable walking shoes are New York packing essentials. 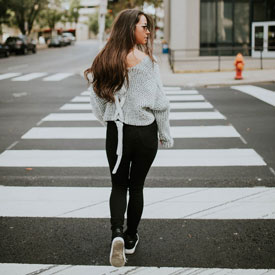 Packing for the Seasons in New York

Spring – March, April, and May

Be sure to bring a rain jacket and umbrella because rain is frequent – but you’ll still need sunscreen and sunglasses for the many sunny days. Temperatures average between 50°F and 70°F (10°C and 21°C), starting around 50°F average in March and rising about 10°F on average each month.

Choose clothes made from breathable, lightweight fabrics to stay comfortable in the hot, humid weather, and bring a water bottle to help you stay hydrated.

New York hosts frequent parades, concerts, and festivals this time of year, so you’ll want to be comfortable spending lots of time outside in the heat. Temperatures average between 80°F and 85°F (27°C and 29°C). 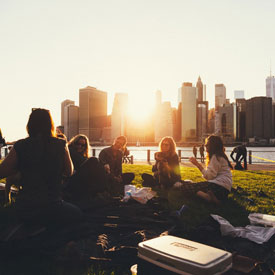 Pack your sweaters and a light coat, and be prepared to dress in layers because the temperatures will be starting to drop, though snow is unlikely. Temperatures average between 55°F and 75°F (13°C and 24°C), starting around 75°F in September and dropping about 10°F on average per month.

Be sure to bring a warm coat, warm but fashionable boots, gloves, and a hat because the temperatures frequently drop below freezing and you’ll most likely encounter snow.

If you’re planning to watch the ball drop on New Year’s Eve, make sure you have appropriate clothes to keep you warm outside for several hours. Temperatures average between 35°F and 45°F (2°C and 7°C). 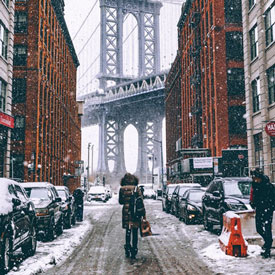 What NOT to Take to New York