Japan is one of my favorite countries in the world. It has a climate, a culture, and a history all its own, so be prepared for a truly unique and memorable experience.

Below you’ll find the top 17 items, what to wear in Japan, what NOT to bring, and I also include FAQs to help you understand the cultural dos and don’ts. Plus I have a bonuse guide to the custom of gift-giving which may be unfamiliar to new travelers to Japan.

What to Pack for Japan – 17 Essentials

What to wear in Japan

The Japanese are open-minded about fashion – you can wear pretty much whatever you feel comfortable in, including shorts and tank tops as long as they’re not too revealing (and the weather permits). It’s still best to air on the side of conservative apparel when possible.

Layers are always good, as are shoes that you can slip on and off easily – remember you’ll be taking them off and putting them back on frequently. Be sure to bring a light rain jacket if you’re visiting in a rainier season! 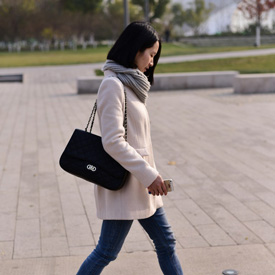 We mentioned this above but it’s worth repeating: it’s considered rude to go barefoot inside most places and flip-flops are a no-no, so bring plenty of comfy socks to wear or carry with you!

What should WOMEN wear in Japan? – (Click to expand)
Below is a sample women’s clothing list. (All items link to Amazon.com for your convenience).

Fashion in Japan offers quite a broad spectrum of different looks and trends. Cleavage is considered to be ‘revealing’ but legs are widely flaunted without much concern – so show them if you so choose! Dress a bit more conservatively when visiting temples, or when you spend time with local families. Shoulders are also considered to be inappropriate with the older generations, so it’s best not to pack strapless dresses or even tank tops with very thin straps.

Slip-on shoes are crucial since you’ll be taking them off and putting them on repeatedly. For dressing up, bring your kitten heels or a pair of dressy sandals. For the warmer seasons, you’ll do well with a crisp white t-shirt, a statement belt, and a pair of skinny jeans for dinner. In winter, you’d definitely need a thicker parka and a chunky scarf for the northern parts of the country.

What should MEN wear in Japan? – (Click to expand)
Below is a sample men’s clothing list. (All items link to Amazon.com for your convenience).

Generally-speaking, Japanese men tend to dress more conservatively, so stick with a more muted, modern look. You will still find plenty of Western inspiration wherever you go, so you shouldn’t stand out like a sore thumb. In the bigger cities, you’ll find more fashion-forward attire, but you can’t go wrong with the clean-cut a sophisticated look no matter where you are.

Think khakis, nice slacks, tailored button-downs or sweaters, and nice-looking footwear. Shoes should include walking shoes, for sure, and maybe a trendy pair of suede sneakers or leather loafers for nicer occasions. Any footwear should be fairly easy to remove and put back on – you’ll be doing it a lot. During colder months you’ll need warmer sweaters and a heavier jacket.

You’ll find that the Japanese way of life is easy to love, and the culture is fascinating. Pack light because you’ll definitely want to shop, but be sure to select a versatile wardrobe that will allow you to switch between exploring, shrine visits, shopping, and semi-formal dinner outings.

Packing for the Seasons in Japan

Mild and pleasant weather plus blossoming trees make this an ideal time to enjoy Japan. They are also what make spring such a popular tourism time, so prepare for crowds. Rains can happen, and you’ll see some fluctuation in the weather so be prepared with good layers that can be easily added and removed.

Bring a light jacket and soft pants and tops to keep you comfortable and breezy. Temperatures average between 40°F to 55°F (4°C to 13°C). 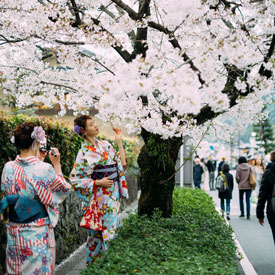 Most places in Japan are hot during the summer, with humidity that makes it worse. Tourism is a little lighter this time of year.

Pack clothes that will keep you cool in the heat, but try to remain respectful and tasteful when possible. Light fabrics, pretty blouses, breezy skirts, and a sun hat will serve you well. Mountainous regions of Japan are less hot and more enjoyable. Temperatures average between 65°F to 80°F (18°C to 27°C).

This is typhoon season, but when there are no storms the weather is generally mild and pleasant, albeit a little unpredictable.

Pack for any weather: comfortable pants and skirts, blouses and sweaters. Bring a rain jacket that can also keep you a little warm – anything that can be used for multiple purposes will save you room in your luggage. 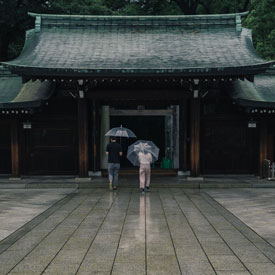 Layers, layers, layers! sweaters and a jacket or coat are needed, plus hats and gloves if you feel you’ll need them (most people do). Temperatures average between 25°F to 35°F (-4°C to 2°C).

How to dress for the activity in Japan – (Click to expand)
Religious Sites: The Kiyomizu-dera, Fushimi Inari and Senso-Ji are but three of the most well-known shrines and temples that form part of a massive collection that sprawls all over the country. Visiting these sacred sites is a very important tradition in Japanese culture. It’s vital to keep in mind that as a tourist you are entering holy grounds. Respect the sacred value of the visit, and dress appropriately. Shorts at or below the knee, pants, shoulders covered – think “modesty” and follow the examples of the locals.

Gourmet Food: Japanese food…There is so much to say and so much to experience. From delectable sushi platters to richly flavored Soba and Udon Noodles to Tonkatsu and Yakitori. The Japanese take great pride in their cuisine and food culture is something that many social activities revolve around. Also, don’t be afraid to dine alone – it’s actually quite a common practice in Japan!

This is the country that has the most Michelin-awarded cities. There are 304 places to choose from in Tokyo alone, but this doesn’t always mean you have to dress up. It’s best to do your homework so that you don’t show up to a street stall wearing your finest garb. For casual dining, you don’t have to worry much about what you wear, but some establishments will ask you to remove your footwear. Nicer clothing is never bad, though, so air on the well-dressed side if you’re unsure.

Beaches: Japans’s unique structure offers plenty of coastline on either side of the country, and this means fun in the sun! Sunbathing and swimming seasons differ hugely from south to north and it’s said that the best beaches to visit are found in Okinawa (south) but there are other spots that offer some tropical vibes too. Bikinis are a natural choice for women, and as long as they’ll stay on during any of your chosen activities, they’re perfectly acceptable. Bring a cute cover-up for when you come up from the beach. Men tend to wear anything from speedo’s to board-shorts, so it all depends on your taste.

Baseball: Baseball was first introduced to Japan in 1872 and is probably one of the most popular spectator sports in the country. The highest level of professional baseball in Japan is the Nippon Professional Baseball League. The first of each 144 regular season games kicks off in March each year, and a 7-game contest series in October determines the winner of the Nippon Series.

While both March and October are probably not the warmest of months, you’d do well in jeans, canvas sneakers, and comfortable hoodies and sweaters. You might also want to refrain from wearing anything related to baseball from other countries – purely out of respect. Expect sunny days in March and October, so bring along a pair of sunglasses for outdoor games.

What NOT to bring to Japan

What NOT to wear in Japan – (Click to expand)
Cities like Osaka, Ginza, and Tokyo are considered to be the fashion capitals of the country. In Japan, fashion is very progressive with the younger generation. You can get away with wearing almost anything in Japan, but you will want to be respectful and aware of cultural norms that are observed within their society.

Most commonly, you will be asked to remove your shoes at certain public establishments and the homes of people you visit. Bare feet are not okay in most places, so bring socks! Avoid flip-flops. Most homes and public places have a small vestibule called a ‘genkan’ where shoes are removed and kept. In some cases, slippers are provided.

This rule also applies to most shrines and temples. Dressing appropriately when visiting these religious sites is imperative.

Other than that, you are all set to head out on a stunning adventure in the Land of the Rising Sun.

While tipping is generally frowned-upon in Japan, giving gifts to your hosts is common practice. Here are a few things to be aware of:

FAQs about travel in Japan