Spain is a wondrous mix of the old and new. To help navigate this great country, I put this packing checklist together.

At the end you’ll also see a section on what to wear in Spain as well as a list of items NOT to bring and other FAQs.

Spaniards have style and taste — and that goes for every aspect of their lives. To fit in, make sure you pack accordingly, and don’t forget your appetite, endurance, and appreciation of life’s simple pleasures.

What to Pack for Spain – 20 Essentials

Don’t Forget These Other Items for Spain

What to Wear in Spain

How to locals dress in Spain? From fiestas to the flamenco, Pablo Picasso, and Antoni Gaudí, Spain is a vibrant country with a lot to offer. Whether you are visiting the major cities like Barcelona or Madrid or planning a coastal getaway in Andalusia or the Canary Islands, you will find that Spaniards have a great sense of fashion.

Bring clothes that are well fitted in muted colors. Dress on the conservative side and choose versatile outfits that can be worn in museums and churches during the day and then to restaurants, concerts, and dancing at night. 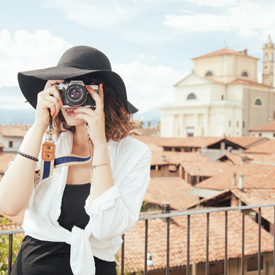 What should WOMEN wear in Spain? – (Click to expand)
Below is a sample women’s clothing list. (All items link to Amazon.com for your convenience).

Women in Spain have a great sense of style, with a smart casual look that is on the conservative side. Start by packing footwear which is comfortable and can easily be worn for many hours such as fashion sneakers. Many local women wear ankle boots from fall to early spring and wedge heels during the summer evenings. Skinny jeans are very popular in any season and the trendy wide leg plants look great in spring and summer. On top, bring camis to pair with long sweaters, cardigans, or a nice blouse. During the warmer months add some style to your outfits by packing jumpsuits and long maxi dresses. For outside, pack a light hooded jacket and retro band shades. Lastly, boho earrings make great accessories for any outfit along with leather band bracelets.

What should MEN wear in Spain? – (Click to expand)
Below is a sample women’s clothing list. (All items link to Amazon.com for your convenience).

Up your style when visiting Spain. Start with a pair of comfortable shoes to wear in the day and leather wingtip shoes in the evening. Pants are worn in every season even when it is hot outside so pack a few pairs such as skinny fit jeans and/or tapered trousers. A nifty leather money belt protects you from pickpocketers by being able to store your cash inside the belt. On top, choose short sleeve dress shirts and polos for warmer months and oxford long sleeves and cardigans for the cooler months. Bring clothes that are well fitted and in muted colors without graphics. Outside wear a light hooded jacket with sunglasses. If it is cold pack beanie hat and scarf. Bring an RFID minimalist wallet for your credit cards and pack it in a rucksack for day exploring.

Packing for the Seasons in Spain

There’s a prevailing myth that the weather in Spain is perfect all year round. While many parts of the country enjoy wonderful weather much of the time, every part of Spain endures some rougher weather and seasonal changes. The golden rule is to do some research on the specific region you’ll be visiting, but the guidelines below should be more than enough for most travelers.

Spring in Spain is lovely, and a hot time for tourism. When winter finally lets go, the air warms and the weather stays mild, so sun is plentiful. In certain parts of Spain it’s not uncommon to have a few days that are warm enough for beach time, but don’t plan on spending all of your time sunbathing in a bikini.

Most of Spain enjoys breezes and temps comfortable enough to dine outside without a jacket, but remember that rain is not uncommon in spring. 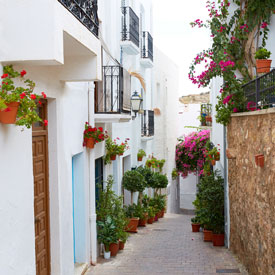 Pack a good rain jacket and a windproof travel umbrella so that you’ll be prepared should you be caught in a rainshower. A layering shawl is ideal to protect you from the chill of cooler evenings. Temperatures average between 55°F and 65°F (13°C to 18°C) with earlier months being the coldest.

This season brings heat to the whole country, though the northern areas are much milder than the southern regions. Rain can still be expected, especially in the north, so bring a rain jacket and a good umbrella!

Pack light layers to ward off occasional breezes and to protect your skin from the sun, but expect to tolerate some higher heat, too. A sunhat, sunglasses, and beachwear (swimsuit, swimsuit cover up, flip flops) are definitely appropriate – just keep beachwear at the beach and the pool. Summer is kind of a shoulder-season to the two primary spring and fall tourist seasons, but you can expect to still see a lot of tourists. Temperatures average between 70°F and 85°F (21°C to 29°C).

A magical and mild time in Spain, the fall brings some crispness to the air and the changing of the leaves. When packing for a fall trip, be sure to include a light jacket and a scarf or shawl – you’ll want to have something to ward off the evening chills that can also keep you cozy on colder days.

Crowds are prevalent since the weather is so nice (this is a high-season, after all), so you’ll encounter throngs of eager visitors at attractions. 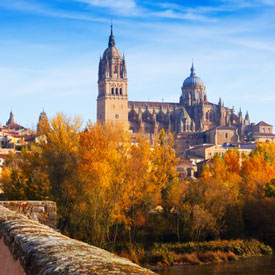 Sometimes winter tends to sneak in a bit early, so it’s a good idea to check local weather forecasts right before you go and to pack accordingly. Temperatures average between 55°F and 70°F (13°C to 21°C) with later months in the colder ranges.

Winters in Spain tend to be drier than other places in Europe, and are fairly mild with regard to weather. Obviously, this is the coldest season of the year, so pack accordingly, and don’t forget to bring layering items that can be mixed and matched so that you can avoid bringing too much clothing!

You may only need a fleece or a mid-weight jacket if you’re used to the cold, but if you come from a place where cold is uncommon you may want to opt for a heavier coat and a hat and gloves. Certainly if you’re planning to ski or take part in other snow sports while on your trip, you’ll need to pack appropriate gear. Temperatures average between 45°F and 50°F (7°C to 10°C).

How to dress for different activities in Spain – (Click to expand)

Religious Sites – Catholicism has been very prominent in Spain for hundreds of years and as a result, beautiful churches and cathedrals can be found throughout the country. Santiago de Compostela Cathedral is known as one of the greatest works of architecture and Seville Cathedral is the largest gothic cathedral in the world. As these are religious sites, it is important to pay attention to the dress code and wear outfits that are more on the conservative side. Both men and women need to have their shoulders covered. If you do choose to wear shorts (though not recommended), ensure that it goes below the knee. Anything that exposes cleavage, the midriff or back should be avoided. Just keep in mind that locals normally save shorts for the beach so pants are always a better option along with shoes instead of sandals.

Gourmet Food – From Spanish tapas to the coastal seafood, charcuterie, and roasts, the cuisine in Spain is packed with flavor. Spain is a gourmet food destination with some restaurants even gaining a Michelin star (many of which are located in San Sebastian). El Celler de Can Roc, Akelarre, and Arzak are some of the top rated and have three Michelin stars. Whether you are at a fine dining restaurant or out for a night of tapas, take a smart casual approach to how you dress. For casual restaurants, men can wear dark fitted jeans with a t-shirt and blazer and for fancier restaurants, go with trousers and a dress shirt. For footwear, choose a nice pair of leather shoes. Women can wear maxi or cocktail dresses with a pair of wedge heels. For colder months, wear ankle boots, with black skinny pants, a blouse and nice sweater. Makeup and jewelry are also common for a night out.

Beaches – From powder sand beaches to crystal clear waters, Spain has plenty of beaches for a relaxing holiday. Costa Brava, Gran Canaria, Majorca, and Costa Del Sol are just some parts of Spain offering fantastic beaches. Finally, these are places where you can dress in shorts! Getting to the beach though, you will want to blend in with locals so wear a flowing dress overtop or shorts and a tank. For women, bikinis are the most popular choice. Men tend to wear swim shorts that go above the knee and are more fitted. Watch out for pickpocketing though as beachgoers are a prime target. Do not take any valuables with you and by bringing an RFID wallet to throw in a bag with many pockets. It’s also a good idea to bring a microfibre towel that is lightweight for packing and quickly dries.

Football (Soccer) – Football is the most popular sport in Spain where it’s practically considered a religion and some of the worlds best clubs like Real Madrid and FC Barcelona compete. If you are already a fan of the game, wear your favorite teams’ jersey. If you want to go the extra mile, throw on some face paint! If you just want to experience Spanish football, pick a side and dress in their colors. It’s easiest if you pick the home team to avoid unwanted comments from passionate fans. Jeans are the most popular choice for bottom wear and don’t forget to bring a pair of sunglasses.

What NOT to Bring to Spain:

What clothing should I NOT wear in Spain? – (Click to expand)
The people of Spain have a great sense of fashion. To not stand out as a tourist, dress on the conservative side and never wear shorts or sandals unless you are going to the beach. Avoid baggy clothing, sweatpants, sweatshirts, work out clothing, graphic tees, bright colors, baseball caps, and sneakers. You will be doing plenty of exploring around Spain, so do not bring any shoes that are uncomfortable for walking. Women should also avoid tops with plunging necklines, crop tops, short dresses, and shorts. Lastly, never wear an opposing teams jersey in a city.

FAQs about Traveling in Spain