These three unique Southeast Asian neighbors are great options to visit as part of a larger, longer trip. With the beauty of their ancient beliefs and monuments, you’ll have plenty to explore.

Below you’ll find my suggestions for what to wear in Vietnam, what to pack for these countries, plus what NOT to bring and some tips for traveling around the region.

Remember to keep your open mind and bring your sense of adventure, and enjoy these gorgeous countries!

What to Pack for Vietnam – 17 Essentials

Other items you may want to take with you

What to wear in Vietnam

Layers are good here, and fabrics that dry quickly. Zip-off quick-dry pants, moisture-wicking garments, and anything that will protect you from the sun will serve you well.

Opt for good sunglasses, a quality sunhat that can get wet without damage, and good hiking/walking shoes that can also get wet.

It’s best to dress a little more conservatively here, too, in order to respect local culture and customs. 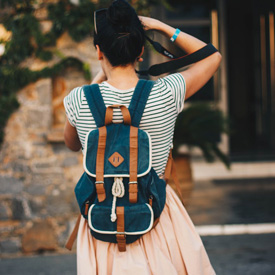 Packing for the Seasons in Vietnam

This is also the high season for tourism in this region. You’ll find that different areas in each country vary a little with regard to weather, but for the most part these countries follow very similar seasonal patterns. Layers are most important here, and even though it’s the dry season you should make sure that your fabrics are light and quick-drying. A hat is also a good idea to keep the strong sun off of your face and neck. During the dry season, expect less humidity and fewer rain showers – though still be prepared for some rain while you’re there. Bring a good rain jacket that you can carry with you in case of pop-up storms. Temperatures are typically around 70-80 degrees Fahrenheit.

It’s called the wet season for a reason – the vast majority of annual rainfall for these countries falls between May and October, with the least rain in the beginning of the season and the most near the end. It may surprise you that the temperatures are often warmest during this season, too, so plan to wear fewer layers, and to have your rain jacket and umbrella handy at all times. Waterproof shoes are essential, too. Don’t worry, it’s still a lovely time to visit if you pack appropriate rain gear. The area is lush and beautiful, and tourist attractions are less crowded. Temperatures in the wet season hover around 80 degrees Fahrenheit but can reach as high as 100 degrees.

What NOT to bring to Vietnam