Dublin is a lively and bustling city with jovial locals, historical sites, and dozens of cool pubs. Situated on the coast of Ireland, you’ll also have access to the sea. There always seems to be something happening in Dublin – whether it’s a new art exhibition, a series of concerts, or a sports event.

The city is also very walkable, lending its parks, churches, seafront, historical sites, and restaurants highly accessible. But if you’ve had enough of the city life, you won’t have to go far to reach some of Dublin’s extraordinary walking routes that boast trails along the Wicklow mountains and coastline. Below, you’ll find a list of our go-to items to include when packing for a trip to Dublin this year.

What to Pack for Dublin – 17 Essentials

What to Wear in Dublin

Dublin is a cool blend of a modern city with Medieval historical sites, cozy pubs, and a lively nightlife. It tends to be quite rainy and cool in the fall, winter, and spring, but you can expect to see a lot more sun in the summer. So depending on what time of year you go, you’ll want some warmer layers, an umbrella, some good (waterproof) walking shoes, or just some fashionable rain boots.

Because of its bustling nightlife, I would also pack some “going out” clothes if you are into that. Dublin has a mix of pubs and clubs, so if you want to go out and dance, dress accordingly! If you’d rather hunker down in a cozy pub on a rainy night, then comfortable, casual clothes will suffice. 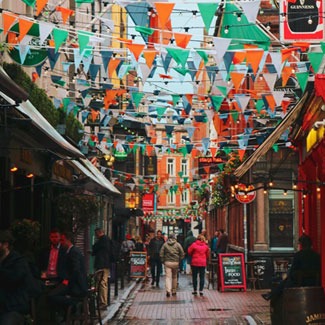 What Women Should Wear in Dublin - (Click to expand)

Below is a sample women’s clothing list.(All items link to Amazon.com for your convenience).

I think it is best to come prepared with outfits that will withstand poor weather, make you feel comfortable in a pub, and allow you to dress up if you want to go out. I always have some good jeans, leggings, and sweaters for those casual nights out (or in!). But with Dublin’s busy nightlife, you may also want to pack a couple of outfits that will support going out to drink or dance, if that is something you are into.

What Men Should Wear in Dublin - (Click to expand)

Below is a sample men’s clothing list.(All items link to Amazon.com for your convenience).

Dublin is a pretty cool and casual city, so having basic clothing items like a denim jacket, jeans, sweaters, and a warm hat will suit any guy well when exploring the city. If you’re interested in the nightlife or even just going to a nicer restaurant, packing a dressier button-down shirt would be great to have as well.

Dressing for the Seasons for Dublin

Dublin has a temperate, maritime climate that doesn’t see a lot of rapid change in weather throughout the year. March will still bring drizzly rain showers, so don’t forget your rain jacket if visiting during this time. You’ll see temperatures rise in April and May, so you’ll want to pack a lighter cardigan, jeans, and maybe even some sandals.

You’ll see average temperatures approaching 50 degrees Fahrenheit in March, but progressing to the 60s by May. 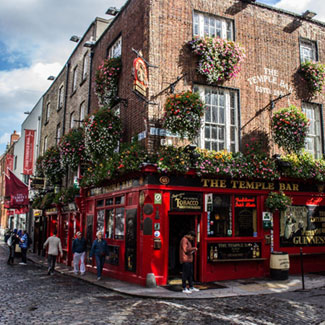 Summer in Dublin is pleasantly warm and not extreme in anyway. You’ll typically find the warmest and driest days during these months, though you may still see an occasional drizzly day. Pack your sunglasses, T-shirts, and a sweater for the evening. This is also the most comfortable time of the year to be wearing a “going out” dress in the evenings.

You’ll pretty much see temperatures hover around the mid 60s to mid 70s degrees Fahrenheit throughout the summer months. Nighttime temps can drop to the low 50s.

September is still quite warm, but as October and November come, you’ll see more cloudy skies and lower temperatures. You might want your wool socks and warm hat by the time October hits, but I’d still have a T-shirt and light sweater for the days that tend to be a little warmer.

September will still have days that reach the low 60s, but by the time November is here, you can expect highs of 50 degrees Fahrenheit with lows of 40 degrees. 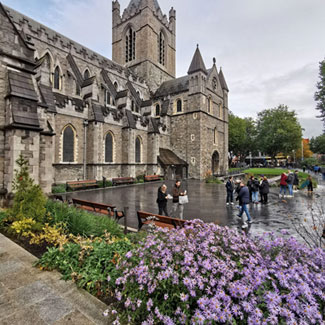 Though Dublin’s winters are nowhere near as extreme as some other areas of the world, it still has its fair share of cold and rainy weather. Snow is pretty unlikely in the city, so you’ll primarily be battling rain and wind with an occasional crisp, sunny day. Pack the flannels, insulated vests or winter coats, and any other warm base layers you might want.

Average temperatures throughout the winter months tend to be in the low to mid-40s.

Dressing appropriately for the activity– (Click to expand)
Going Clubbing/Dancing: A cute dress with some heels and a clutch is the perfect trio for a night out in Dublin. Guys can choose between going casual with a simple T-shirt, or getting a little dressier with a button-down.

Hitting the Pubs: I personally prefer the cozy atmosphere of a pub in Dublin. Most will have live music every night, and with a hardy meal and a glass of Guinness, you really can’t go wrong! Dress casually and comfortably to enjoy the evening with a good pair of jeans, boots, and a warm sweater.

What NOT to Bring to Dublin

What NOT to Wear in Dublin – (Click to expand)

There are really not a lot of specific things that you just absolutely shouldn’t wear in Dublin, but again, I’d have to say any summer clothes that are meant for hot and tropical destinations won’t do you much good here!

FAQs about Traveling to Dublin