This compact country boasts Medieval castles, seaside port towns, enriching forests, and a touch of Nordic culture all within its humble borders. Often left in the shadows to some of its larger, more popular neighbors, Estonia is truly one of Europe’s most underrated gems.

This Baltic nation is on a pledge to become the most organic country, but they’re also just as interested in their highly innovative technology. Did you know that Skype was created in Estonia? You may have heard of its capital city, Tallin, but Estonia is much more than that. Below, you’ll find a list of our essential and most coveted items to include when packing for a trip to Estonia this year.

What to Pack for Estonia – 17 Essentials

What to Wear in Estonia

Estonia has a great blend of many old-world, Medieval-style cities surrounded by vast forests, lakes, and other areas of untouched nature. Many who venture to this northeastern part of Europe are interested in exploring historical cities, but also want to experience the country’s natural beauty.

For that reason, I would suggest bringing some nice outfits that would be suitable for dinners out, but I would also balance that with practical items that would allow you to take a great hike. If you’re coming for Tallinn’s famous Christmas market, don’t forget your warm layers either! 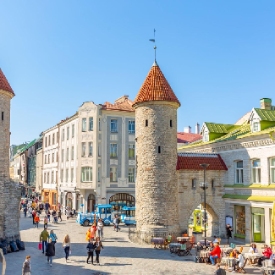 What Should WOMEN Wear in Estonia? – (Click to expand)
Below is a sample men’s clothing list. (All items link to Amazon.com for your convenience).

As a female traveler, I want options when it comes to my wardrobe. I always bring some items that can be dressy, but I also always bring other items that are comfy. If you come in the spring or summer, bring your sandals, leggings, T-shirts, rain jacket, and a swimsuit. If coming for the Christmas market in December, pack some wool items like a hat, gloves, and base layers.

What Should MEN Wear in Estonia? – (Click to expand)
Below is a sample women’s clothing list. (All items link to Amazon.com for your convenience).

Just like clothing items for women, guys will want a blend of a few nicer outfits for dinners and drinks but will also want practical, athletic gear for walking around cities or exploring nature. Don’t forget your swim trunks, as you’ve got the option of jumping in the Baltic Sea or one of Estonia’s many fresh water lakes.

Dressing for the Seasons

Early spring in Estonia is still trying to fight its way out of Winter. Weather can be fickle with showers and still some snowfall and strong winds. April usually brings warmer temperatures with snow and ice melting from the sea and lakes. I would absolutely bring a rain jacket in the spring, but I wouldn’t necessarily pack my thick winter coat any longer. Instead, bring some wool base layers to wear under that rain jacket if the temperatures drop a bit when you’re there.

Average temperatures range from 32 to 55 degrees Fahrenheit as you progress from March to May. 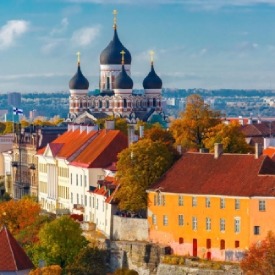 Summers in Estonia are mild but still warm. Coastal areas often carry a cool sea breeze and will bring slightly more humid conditions. July is peak swimming season, so you’ll definitely want your swimsuit for a summer trip. If you’re into camping, this is the season to do it. Bring your good hiking shoes and athletic pants in addition to any other essential camping gear.

You’ll find temperatures hovering around the mid to high 60’s degrees Fahrenheit for most of the summer.

September and October are lovely months in Estonia. Temperatures remain fairly mild with a mix of warmer days and drizzly days. You’ll start to see bursts of fall colors in all the foliage. Jeans, a warm hat, and a cozy sweater are perfect for this time of year. November temperatures begin to drop significantly, however. If you’re coming during this time, you’ll probably want your winter coat and boots.

September and October will bring you highs in the 50s, but November temperatures will drop into the 30s. 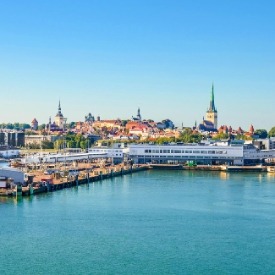 Mid-winter temperatures in Estonia can be harsh. Snow will start to fall in December, and it may stick around until March. Daylight hours dip to just six hours per day, and with increasingly icy temperatures and conditions, I highly recommend you pack your winter jacket, boots, and all other cold weather clothes.

Winter temperatures will range from the teens to maybe creeping up to 30 degrees Fahrenheit at most.

Dressing Appropriately for the Activity – (Click to expand)
City outings:
Exploring a new city or town means doing a lot of walking that day. Save yourself a pair of sore feet and wear some comfortable walking shoes. I always like to bring a day pack, too, in order to store snacks and water, or in case I find some souvenirs that I’d like to bring home.

Camping/trekking:
You can always rent some of the larger camping items once you’re in Estonia (e.g. a tent or sleeping bag), but there are some smaller and highly packable items out there that are great to bring along. Some of our favorite items include the Quick-Dry travel towel and the Lifestraw water bottle. With these items, you’ll never be left cold, wet, or without clean water. We would, of course, also suggest you wear some solid hiking shoes, general athletic/active clothes, and always pack a warm sweater just in case the temps drop at night.

What NOT to Bring to Estonia

What NOT to Wear in Estonia – (Click to expand)
When traveling to Estonia, I wouldn’t ever pack formal or overly fancy clothes (including clubbing outfits). There just isn’t a need for it. And with all of Tallinn’s beautiful cobblestone, I also wouldn’t try walking in heels!