If you are looking for an adventure on your next overseas vacation, it would be hard to find a better destination than Mount Kilimanjaro. Standing at over 19,000 feet in elevation, Kilimanjaro is the highest point in Africa and the highest freestanding mountain in the world.

Kilimanjaro is an excellent introduction to the world of high-altitude climbing, because it doesn’t require any technical climbing experience, and anyone who is fit, healthy, and determined has a good chance of reaching the summit. In order to be properly prepared for a crack at climbing Kilimanjaro, you will need to train hard and bring all the necessary gear. Below, you’ll find some essential items that you should make sure to pack, plus info on what not to bring and some common FAQs.

What to Pack for Kilimanjaro - 17 Essentials

What to Wear on Kilimanjaro

As you climb Kilimanjaro, you will pass through five distinct climate zones on your way to the summit. Each zone will require different clothing to suit the conditions. Your climb begins in a warm cultivation zone between 6,400 and 9,800 feet. From there, you will ascend into a warm rainforest zone before continuing into an arid moorland zone. Next, you’ll pass through the alpine desert which can be warm during the day but is always cold at night. The final zone is the always cold and windy summit zone, where you will encounter freezing conditions and snow. 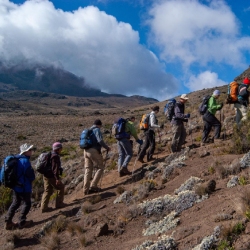 Layers are the key to successfully dressing for Kilimanjaro. This way you can add more clothing or remove layers as necessary for each climate zone. Start with a warm base layer of long underwear – make sure to bring separate sets for hiking during the day and sleeping at night. Next, you need insulating layers, like a fleece jacket or a down coat. You’ll want to cover the insulating layer with a wind and waterproof outer layer, think raincoats and waterproof pants. Finally, don’t forget about hats, gloves, sun protection, and really good hiking boots.


What should WOMEN wear in Kilimanjaro? – (Click to expand)
Below is a sample women’s clothing list. (All items link to Amazon.com for your convenience).

Since all climbers on Kilimanjaro must dress based on the weather conditions, there is not a whole lot of difference between sexes with regards to the clothing packing list. Of course, women will want to bring a few comfortable and durable sports bras for the trek.

Since climbing has been a male-dominated sport for such a long time, it can sometimes be hard to find the right size high altitude clothing for women. This is especially true for extreme high-altitude peaks like in the Himalayas, but it can also be the case when shopping for trekking peaks like Kilimanjaro. To make it easier to find the right clothing for female climbers headed to Kilimanjaro, we’ve included links to Amazon for each item on our list, so you have no difficulty finding the clothing you need for the expedition. Don’t forget to bring moisture-wicking clothing, especially for the base layer.

What should MEN wear in Kilimanjaro? – (Click to expand)

Below is a sample men’s clothing list. (All items link to Amazon.com for your convenience).
Men planning a trek to Kilimanjaro should pack like they would for any multi-day backpacking trip through a wide variety of climates. Bring plenty of layers, and choose clothing that is lightweight, breathable, and fast-drying. Lower on the mountain you may wear nothing more than a t-shirt and shorts, but chances are on the summit you will be glad you brought along the long underwear, warm layers, and a waterproof coat and pants.

Don’t forget to bring a really good pair of hiking boots on the expedition. You’ll often be hiking more than five hours a day through a wide variety of climates, so you will need shoes that are both comfortable and extremely durable.

When shopping for Kilimanjaro, try to avoid cheap off-brand products that will fall apart after a few days and choose clothing from proven outdoor companies. Our links to Amazon should help – all of these products have been reviewed by hundreds if not thousands of people and get four to five stars!

Dressing for the Seasons on Kilimanjaro

Mount Kilimanjaro is located near the equator, so it doesn’t have traditional seasons like you get in more temperate regions. Instead, there are two rainy seasons and two dry seasons each year. That said, there is a noticeable difference in the temperature between the seasons on the mountain. The warmest months on Kilimanjaro are between December and February. January is the single hottest month, with average highs of 84 degrees Fahrenheit. 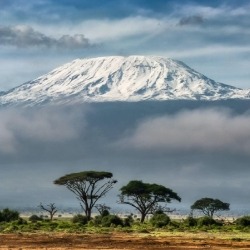 Remember, the temperature on Kilimanjaro differs drastically between the base of the mountain and the summit. When temps low on the mountain are in the 80’s, it’s often below 20 degrees on the summit. This time of year, sun protection is essential, along with a good pair of hiking shorts and t-shirts for the lower elevations.

You are most likely to experience good weather on Kilimanjaro between April and September. This does overlap, however with the rainiest season on the mountain which is between March and May. April is the single month with the most precipitation. This time of year, lows average around 58 degrees Fahrenheit low on the mountain, with highs in the upper 70’s.

In the wet season, a high-quality raincoat is a must, along with waterproof pants and hiking boots. Don’t forget bug spray and a mosquito head net to fight off the insects.

June, July, and August are the coldest months on Kilimanjaro when average lows are around 48 degrees Fahrenheit near the base of the mountain and below freezing at the top. Fortunately, the cooler weather during this time of year comes with less rainfall, so trails will be easier to navigate and camp will be much more comfortable.

In the cool season, it’s even more important to bring warm base layers and insulation from the freezing temperatures near the top. Don’t forget your warm gloves and balaclava to protect your hands and face. 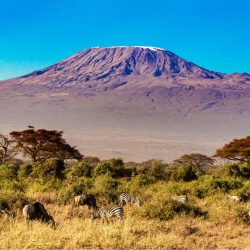 The second rainy season on Kilimanjaro runs from November to December. Although these months don’t get as much precipitation as between March and May, you can still expect plenty of rain, especially in the rainforest zone. This time of year you can expect lows in the lower 60’s and highs in the low 80’s in the Kilimanjaro region.

To make sure that you don’t slip on the slick trails, bring your best pair of hiking boots to the mountain. Remember that you can expect to encounter a wide variety of conditions on Kilimanjaro no matter what time of year you choose to climb, so it’s always important to pack for everything from extreme heat to freezing cold.

Dressing Appropriately for the Activity – (Click to expand)
Lower Altitude Trekking: Lower on the mountain, you can expect to encounter warm temperatures during the day, with cool nights. Wear hiking pants or shorts and moisture-wicking shirts. You are likely to encounter rain low on the mountain, especially as you pass through the rainforest zone, so you’ll want to keep your rain jacket and waterproof pants handy. Finish your outfit with sun protection and a trusted pair of hiking boots.

High Altitude Trekking: High on the mountain, you are almost guaranteed to encounter freezing temperatures, especially at night. Wear a warm base layer, with a sweater or down jacket for insulation and a good wind/waterproof coat. For your lower body, wear long underwear and hiking pants, but keep a set of fleece pants nearby in case temperatures drop. You’ll want to protect your extremities with gloves and a warm hat or balaclava.

Camping: It’s a good idea to bring along extra clothing specifically to wear while resting in camp. That way you can sleep in clean clothes each night rather than wearing the same thing that you have been trekking in. Keep a special set of long underwear just for your sleeping bag and make sure that your shorts and boots are nearby in case you need to exit the tent at night.

On Safari: Most climbers on Kilimanjaro also want to experience a safari before leaving Africa. In the lower altitude bush, temperatures will usually be much warmer than on the mountain, with drier conditions and more sun. Wear shorts or comfortable walking pants and a long sleeve shirt to protect your arms from the sun and insects. Don’t forget a wide-brimmed hat and sunglasses to shield yourself from the equatorial sun.

What NOT to Bring to Kilimanjaro