Updated on September 28, 2022 by Asher Fergusson

Shanghai is an electric city buzzing with people and productivity. Located along the water in central-east China, this city juxtaposes the old and the new as it is one of the world’s largest global economic centers and one of China’s oldest cities. A trip to this city will leave you spellbound by its incredible skyline and beautiful Chinese culture.

When you go to Shanghai it is important to pack accordingly. As with any large city, you will be doing a lot of walking and the weather fluctuates based on the season. Read on for our best packing tips before you head off on your next great adventure!

What to Pack for Shanghai - 17 Essentials

What to Wear in Shanghai

Shanghai has all four seasons, which means your wardrobe will vary greatly depending on when you decide to take your trip. However, in general, China is much more modest than the west is and therefore there are some staple pieces that you can usually rely on no matter what time of year it is there.

When visiting temples it is required that you keep your shoulders and knees covered, therefore we suggest investing in a good pair of linen pants and a shawl for the summer months, as well as sweaters and pants if you are visiting during the colder winter months. You will also be doing a lot of walking, so make sure you bring a sturdy pair of shoes that will support you for your trip. 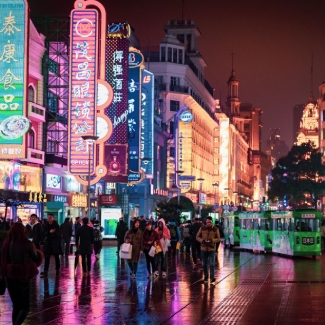 What Should WOMEN Wear in Shanghai? – (Click to expand)
Below is a sample women’s clothing list. (All items link to Amazon.com for your convenience).

The best women’s clothing is going to be something a little more on the modest side with material that is breathable and light. It can get very warm in Shanghai, and it is always very humid, so it is important to make sure that you are well-ventilated. In the winter it can get below freezing and so if you are visiting during those months make sure to bring a jacket as well. Shanghai is monochrome and neutral-colored city when it comes to clothing, with a lot of streetwear and dark color schemes as the primary choice for most residents.

What Should MEN Wear in Shanghai? – (Click to expand)
Below is a sample men’s clothing list. (All items link to Amazon.com for your convenience).

Shanghai is a booming business metropolis and the majority of men that you see there will be dressed in suits and on their way to work. To blend in, investing in a good sports coat and slacks will help you look put together and like you belong there. Another more casual option is investing in some streetwear or nicer t-shirts and dark pants as well.

Packing for the Seasons in Shanghai

Summers in Shanghai can be extremely hot and muggy. Temperatures during this time can range from 80-105 degrees Fahrenheit. They are pretty unrelenting and it is recommended to try to plan your travel in the more moderate shouldering months if possible. One thing to note is that there is not a lot of direct sunlight during this time due to the pollution in the city and there is also rain that will occur during this time which adds to the mugginess. This being said, the dress code in Shanghai still remains on the more modest side, with not a lot of shorts and tank tops to be seen. We recommend that you invest in some flowing short-sleeved shirts or blouses and light linen pants for this time that will help keep you cool and covered. 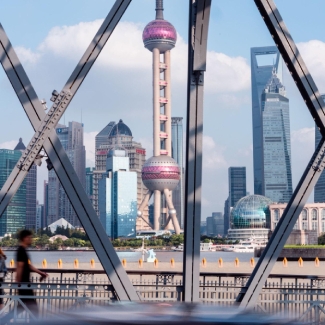 Fall temperatures start to drop and things tend to cool down a bit which makes it much more enjoyable to use public transportation and walk around the city. Temperatures range between 60-80 degrees during this time. There is still some rainfall during this time and the evenings can dip down to the 50s, especially as you get closer to November. We suggest a similar dress code to summer here, just accompanied by a jacket that can be put on or taken off. Dress slacks with longer-sleeved blouses and dress shirts for the evenings are recommended as well as the temperatures have a wider range during this time.

Temperaturs in the winter in Shanghai can drop significantly and are occasionally below freezing. The average temperatures range from 35- 50 degrees and there is the lowest rainfall of the year during this time. We suggest layers for this time of year, as you will be in and out of establishments and the temperature will vary greatly from that outside. A nice jacket is a great option for this time of year as well as pants and boots for walking around the city. 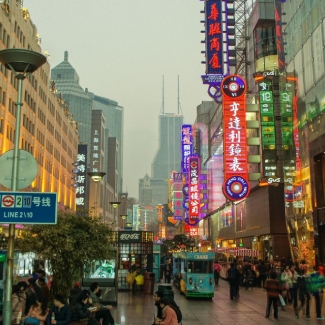 Spring is a more moderate season with temperatures ranging from 45-75 degrees depending on if you are there more towards winter or towards summer. During this time we recommend similar clothing options to fall, with layers and a mix of comfortable linen pants, dress slacks, and black pants with a mix of nicer short and long-sleeved shirts and light jackets.

Dressing Appropriately for the Activity – (Click to expand)
City Exploring: Shanghai is primarily a business city, therefore a lot of your time will be spent in and out of establishments like museums, restaurants, and city buildings. The best thing to wear for a day of city exploration is something that is light and breathable because you will be moving around a lot. Pair this with a great pair of walking shoes and you will be golden!

Day Trips: There are a few different day trips that are available to take out of Shanghai. Make sure to dress comfortably based on the weather and which one you choose to do. Generally speaking, there isn’t much available in the area that comfortable lightweight breathable clothing and good walking shoes won’t work for.

Visiting Buddhist Temples: Visiting temples is a big part of the Shanghai experience. For these, your street clothes will be fine, but make sure and bring a shawl wherever you go if you are wearing tops that do not have sleeves.

Fine Dining: One of the best parts of any city is all of the incredible food options. Shanghai is no exception and going out for a fine dining experience is sure to be the highlight of any trip. Dressing semi-formal or in nice dress clothes is a great option for this

What NOT to Bring to Shanghai

What NOT to Wear – (Click to expand)
Although it does get cold in the winter, it generally does not snow. If you are visiting during the winter time you will not need super heavy parkas or any kind of snow gear. This applies to the summer as well.