Updated on September 08, 2022 by Asher Fergusson

We’ve put together a list of all the things you’ll want to make sure to not forget, what to wear in each season, as well as a list of what NOT to bring.

What to Pack for the Smoky Mountains - 17 Essentials

Other Smoky Mountain Packing List Items Not to Forget

What to Wear in the Smoky Mountains

Great Smoky Mountains National Park is a temperate forest with four distinct seasons. While you’re hiking, keep in mind that the base of the mountain can be 10-20 degrees warmer than higher elevations, so be sure to pack layers for that cooler mountain air.

Spring and Summer will have more thunderstorms and temperature swings, so you’ll want to make sure you have a sturdy raincoat, windproof umbrella, and check the weather forecast ahead of time. How many layers you wear and bring will depend on if you’re doing a shorter day hike or if you’re backpacking. Regardless of season or hiking plans, make sure you wear sunscreen and quick-dry clothing. 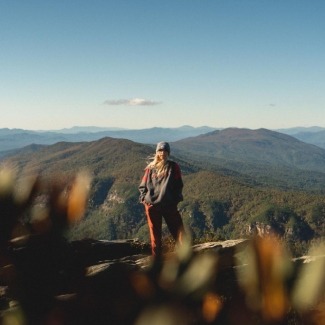 What Should WOMEN Wear in the Smoky Mountains? – (Click to expand)
Below is a sample women’s clothing list. (All items link to Amazon.com for your convenience).

Women hiking in the Great Smoky Mountains will want to wear breathable, quick-dry clothing regardless of season, and pack layers. In the Fall, yoga pants with pockets, a crop workout tank, and an oversized flannel will keep you comfortable. Make sure to bring a fleece jacket and ear warmers, and wear a good pair of hiking boots.

If you’re dressing up in Gatlinburg, you might opt for a nice blouse, jeans, and suede booties, and re-wear that oversized flannel. If you’ll be in the Smokies during the rainy season (Spring), you might want to wear ankle-length rain boots instead.

What Should MEN Wear in the Smoky Mountains? – (Click to expand)
Below is a sample men’s clothing list. (All items link to Amazon.com for your convenience).

Men hiking in the Great Smoky Mountains will want to wear quick-dry clothing and bring lots of layers. If you’re hiking in the fall, a quick-dry shirt, flannel, and quick-dry hiking pants will keep you warm and comfortable. Keep a fleece jacket in your backpack.

If you’re dressing up in Gatlinburg, you might opt for a button-down, jeans, and oxford shoes.

Dressing for the Seasons in the Smoky Mountains

Spring is the most unpredictable weather in the Smokies—you may have sunny skies in the morning and snow flurries in the afternoon. March has the most changes in temperature and weather, you’ll want to plan for snow with gloves and a warm beanie. April has more rain showers, and May is generally warmer (highs of 70s and 80s and lows in the 40s and 50s). 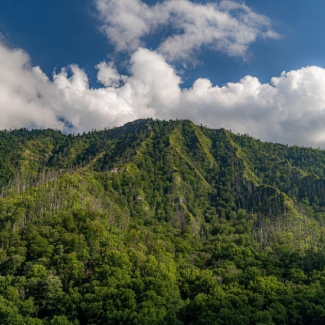 Summers in the Smokies are hot and humid. You’ll want to prepare for afternoon showers and thunderstorms. At lower elevations, temperatures can get up to the 90s. It gets cooler in the evenings with lows in the 60s and 70s.

Fall is breathtaking in the Great Smoky Mountains. Daytime highs are typically in the 70s and 80s in September, cooling to the 50s and 60s in early November. October is the driest month out of the year. This is the best season to enjoy the Smokies, just make sure to layer with a fleece jacket. 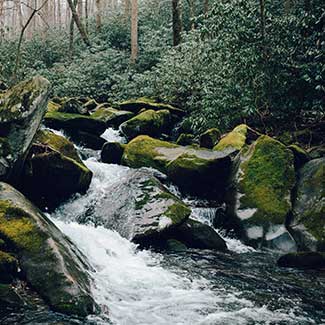 During the winter, Smoky Mountains National Park weather is generally moderate. At low elevations, you’ll get about an inch or so of snow a few times a year. Up in the mountains, snow falls more frequently and during a snowstorm, you might get up to two feet of snow.

January and February are the months that you’ll want to prepare the most for snow in the Smoky mountains and remember your winter coat. January is the coldest month in the Smokies, with an average high of 37℉ and an average low of 20℉.

Dressing Appropriately for the Activity – (Click to expand)
Hiking:
If you’re hiking in the Smokies in the Fall (personally, I think this is the best time), you’ll need a light jacket and will generally be comfortable in whatever hiking gear you like to wear. Your favorite crop workout top, an oversized sweater, and bike shorts with pockets is an option that’s both cute and comfy. For guys, hiking pants or shorts and a lightweight long sleeve can be easily layered for cooler evenings.

Sightseeing:
While Gatlinburg is very much a more casual tourist town, you might want to dress up if you go to a nice dinner or bar. Plan ahead, look at what your options are, and opt for mostly casual with a dressier outfit or two.

If you’re traveling to TN in the Fall or Winter, flannels are perfect, both for women and men. Pair them with oxford dress shoes or suede booties and a scarf for the perfect cozy yet cute outfit. Just keep an eye on the rain forecast if you’re wearing shoes that aren’t water resistant.

What NOT to Bring to the Smoky Mountains