Updated on February 16, 2022 by Asher Fergusson

With a plethora of delicious restaurants, hip coffee shops, and beautiful outdoor sights, Portland is a city that has something for everyone. Whether you’re looking to spend a weekend sipping on beers at one of the many breweries or hiking the lush green mountains that surround the city, there’s so much to see and do.

With constantly changing weather, knowing what to bring along with you to Portland can seem overwhelming. This packing list will answer all your questions including what to wear in Portland, and what NOT to bring regardless of the season in which you’re visiting.

What to Pack for Portland – 17 Essentials

What to Wear in Portland

When figuring out what to wear in Portland, research the weather before you go. This way you can be aware of what the forecast is looking like before you head that way. I’d argue that it’s one of the few destinations that it’s better to be over-prepared rather than underprepared. The last thing you want is gloomy weather and all you have packed is shorts and t-shirts.

Ideally, you’ll want things such as a light multi-use jacket, a raincoat, waterproof boots, and layering pieces that you can mix and match. Portland is known for its “hipster” style so if you want to look like a local, packing a flannel or two won’t hurt. 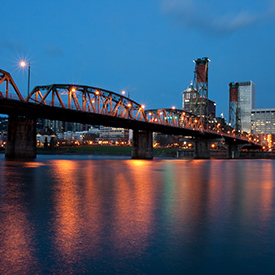 What Women Should Wear? – (Click to expand)
Below is a sample women’s clothing list. (All items link to Amazon.com for your convenience).


When packing for Portland, clothing items for men and women are very similar. If possible, pack versatile pieces that can be worn multiple times in different ways. This will help keep your suitcase light and you won’t have to worry too much about what to wear each day. Because it can rain quite a bit, the most important thing to bring is a lightweight raincoat. Everything else can be layering pieces such as tank tops, jeans, t-shirts, and shorts, depending on the season.

If visiting during the colder months, swap out those t-shirts for thermals and sweaters, and don’t forget to bring a warm winter coat that can withstand winter conditions (whether it be rain or snow). Beanies, gloves, and scarves are another great way to stay warm all while fitting in with the local attire.

What Men Should Wear ?– (Click to expand)
Below is a sample men’s clothing list. (All items link to Amazon.com for your convenience).
For men, packing all of the basics is key for Portland. You won’t need anything fancy so you can ditch the nice button-ups and ties. Instead, opt for simple things like t-shirts, khaki shorts, hiking gear (such as pants and boots), sneakers, and of course, a raincoat. Again, if you want to fit in like a local, I like throwing on a flannel over a t-shirt in case there is a light breeze because they keep you covered with weighing you down.

If visiting during the colder months, focus on packing thermals, jeans, waterproof boots, a winter coat, a beanie, a scarf, and gloves. If you choose to participate in snow sports, you’ll want to be sure that you have plenty of layers to keep you warm while heading down the slopes. Don’t worry too much about packing snow gear as many resorts have attire (such as snow bibs and helmets) available for rent.

Packing for the Seasons in Portland

Spring in Portland means that the city is in full bloom. The winter showers bring colorful flowers and cherry trees to the parks and the sun is out more than the previous gloomy months. When packing for springtime in Portland, it’s all about layers. While the sun may be out during the afternoons, it can still get a bit nippy in the mornings and evenings.

If visiting from warmer climates (such as the southwest), you may find the spring temperatures are still a bit cold. To be best-prepared pack sweaters, t-shirts, a light raincoat, scarves, jeans, and boots. The average temps during these three months range anywhere from 57 F to 68 F. The later into the spring, the warmer it will be so you can adjust accordingly.

Summer is when Portland sees most of its visitors. There is very little rainfall and the days are long and full of sunshine. This makes packing pretty easy. Forego the rain gear and stick with t-shirts, dresses, shorts, and sandals. And of course, don’t forget plenty of sunscreen and sunglasses.

Although Portland is not seaside, there are many parks with river access and waterfalls that are worth enjoying during your stay. Because of this, bringing a swimsuit is also not a bad idea. The trails to the river may be a bit muddy so this is when having those mesh slip-on water shoes will come in handy.

As for temperatures, you’ll find that they range anywhere from 74 F to 81 F. There are times where temps can approach the mid to high 90’s, however, this is rare.

While there is something to be said about Portland’s sunny summers, there is something even more special about its misty green forests during the winter. Snowfall is rare meaning you won’t have to worry about packing too many bulky pieces. A durable waterproof winter coat, sweaters, leggings, jeans, and boots should suffice. If you want to accessorize, beanies, scarves, and gloves are a great way to keep you warm while also keeping you fashion-forward.

During these three months, the average temperatures range anywhere from 45 F to 50 F.

Don’t expect to see a lot of snowfall during the winter – in fact, Portland only sees about an average of 4.5 inches a year. But, if you are looking to ski or snowboard, you can make your way one hour east to Mount Hood where the average high is 35 F.

Dressing Appropriately for Activities: – (Click to expand)
Hiking – If you plan on doing a lot of hiking, you’ll want a good pair of sturdy hiking boots, quick-dry hiking pants, and insect repellent. Because Portland has a lot of standing water in the forests, the mosquitos can be a bit nasty so you’ll want to stay protected as much as possible. And, as mentioned before, it can be a bit wet so if you choose to take a rainy hike, you’ll want a light raincoat that is still going to be comfortable and breathable.

Snow Sports – When going skiing or snowboarding, you don’t want to have to worry about the weather which means wearing the appropriate layers is important. Start with a base layer and add on either a snow bib or ski pants, a thick winter coat, gloves, a helmet, and goggles. And while it may seem silly, SPF is extremely important when on the slopes. The light reflecting off the snow can seriously sunburn your face.

Nightlife – Portland is a very casual city so getting extremely dressed up for a night out on the town isn’t necessary. For men, jeans and a nice button-up with a pair of loafers will do. For women, stick to jeans and dress it up with a blouse and wedges.

Sightseeing – If you’re set on walking around the city and exploring all of its hip shops and coffee houses, you’re going to want to be dressed comfortably. Go for layers (depending on the season), a thin jacket if needed, and most importantly, a good comfortable pair of walking shoes. I typically like to go with close-toed shoes such as sneakers for maximum comfort.

What NOT to Pack for Portland: