Updated on September 27, 2022 by Asher Fergusson

Olympic National Park is known for its biodiversity—foggy coastlines, rugged mountains, and the quietest place in the US: Hoh Rainforest. Olympic NP is breathtaking, vast, and incredible. You’ll want to spend every minute that you can in the park. We’ve put together a list of all the things you’ll want to make sure to not forget, what to wear in each season, as well as a list of what NOT to bring.

What to Pack for Olympic National Park - 17 Essentials

Other Olympic National Park Packing List Items Not to Forget

What to Wear to Olympic National Park

Olympic National Park is one of those incredible places where you’ll want to spend as much time as you can in the park. Olympic NP is made up of different landscapes and climates, such as Hoh Rainforest, Ruby Beach, and Hurricane Ridge.

As such, you’ll want to bring clothes that work for different climates: i.e. plan for both beach and mountain days, for sun and for rain. Don’t forget your swimsuit, although keep in mind that the water will be cold, so you might want to just opt for athletic, quick-drying clothes. Plan for snow from November-March, and make sure you have a warm base layer and a winter coat. 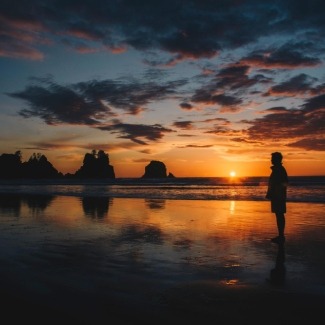 What Should WOMEN Wear to Olympic National Park? – (Click to expand)
Below is a sample women’s clothing list. (All items link to Amazon.com for your convenience).

Whatever season you decide to visit Olympic National Park, you’ll want to wear comfortable, quick-dry clothing, and more layers depending on the season. You might pair a workout tank with a built-in sports bra with an athletic zip-up top, yoga pants, and waterproof hiking boots. Don’t forget ear warmers and hair ties if you need them!

What Should MEN Wear to Olympic National Park? – (Click to expand)
Below is a sample men’s clothing list. (All items link to Amazon.com for your convenience).

Whether you’re traveling to Olympic NP in the summer or winter, you’ll want to wear comfortable, quick-dry clothing. You might choose a button-down with UV protection, quick-dry pants, and waterproof hiking boots. Don’t forget polarized sunglasses on the mountain!

Dressing for the Seasons in Olympic National Park

It’s still cold in the spring, with continued snow and rain that can last all through May. Since it does warm up some, this is the second most popular season to visit Olympic National Park. Make sure to bring warm layers and opt for waterproof hiking boots over Chacos or other open-toed hiking shoes.

At the base of the mountain where it’s warmer, you can expect a low of 34℉ and a high of 50℉ in March, an average high of 57℉ and low of 37℉ in April, and an average low of 42℉ and high of 64℉ in May. Personally, I think cozy flannels are always a great spring layer for camping and hiking in Olympic NP. 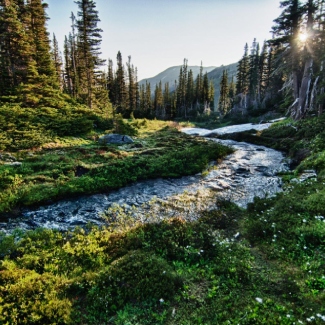 The summer months of July and August are the most popular months to visit the park, and you’ll find that most roads and trails are open. Even though the weather is warmer, you’ll want to prepare for thunderstorms, especially at higher elevations. Make sure you wear layers and an umbrella. June has an average high of 68℉ and a low of 46℉, and July warms up a bit more with average highs of 74℉ and a low of 50℉; August is just slightly warmer with a low of 51℉ and a high of 74℉. This varies some by elevation and area of the park. 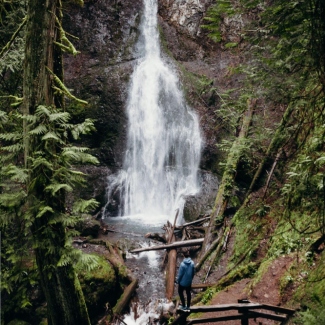 January is the coldest month in Olympic National Park, with lots of snow, especially at the park’s higher elevations. If you’re skiing at Hurricane Ridge during the winter, you can anticipate 30 to 35 feet of snow, so make sure to pack snow gear like snow pants and thermal underwear.

What NOT to Wear – (Click to expand)
Rainforest Contemplation: Hoh Rainforest is often referred to as the quietest and most pristine places in the US, making it a beautiful sanctuary to reflect in, if contemplation or meditation are restful for you. You’ll want to make sure you have a rain jacket, a travel umbrella, and hiking boots, and try to plan ahead with what you’ll need out of your pack to keep noise to a minimum.

Beach Days: Chacos are great for tide pool adventuring. You’ll want to make sure you have a solid windbreaker, either swimsuits or quick-dry clothing, and a quick-dry towel. The coast can get quite chilly!

Mountain Hiking: It’s colder up in the mountains, so you’ll want to wear layers, even if you’re visiting in the summer, as temperatures won’t get warmer than the 60s or 70s (℉) even at a lower elevation. Make sure you have a base layer and a cozy flannel that you can pair with a windproof coat.

What NOT to Bring to Olympic National Park