Vancouver is a west coast seaport surrounded by mountains and is the largest city in British Columbia, Canada. Whether you’re planning on hiking in Pacific Rim National Park or spending most of your time in the city exploring restaurants and strolling around Stanley Park, Vancouver, B.C., is one for the books.

We’ve put together a list of all the things you’ll want to make sure to not forget, what to wear in each season, as well as a list of what NOT to bring.

What to Pack for Vancouver - 17 Essentials

What to Wear in Vancouver

Vancouver has a lot to visit, whether you’re wanting to check out Gastown, Vancouver’s oldest neighborhood known for its whistling steam clock, or head over to Vancouver Island to hike in Pacific Rim National Park.

What to wear depends a lot on the season and activity, but generally, you can divide what to wear by warm or cold weather and city or hiking activities. Vancouver gets the least rain in the summer but a good amount of rain the rest of the year, with the rainy season in the first three months (Jan, Feb, Mar) and the last three months (Oct, Nov, Dec) of the year. It generally never gets above the low 70s (℉), so you may want to carry a cardigan or fleece jacket if you’re coming from a warmer climate. 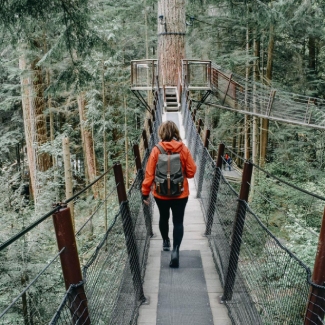 What Should WOMEN Wear in Vancouver? – (Click to expand)
Below is a sample women’s clothing list. (All items link to Amazon.com for your convenience).

If you’re walking around downtown Vancouver in the summer or fall, a black blouse, gray paper bag pants, and a warm cream cardigan give you a versatile outfit you can switch up on other days. If you’re hiking in Pacific Rim National Park or anywhere else, you’ll want to wear your most comfortable athletic clothes and take a rain jacket with you.

What Should MEN Wear in Vancouver? – (Click to expand)
Below is a sample men’s clothing list. (All items link to Amazon.com for your convenience).

If you’re in the city, you can’t go wrong with a button-down and travel-friendly chinos. Since it doesn’t get warmer than the low 70s (℉) year-round, it makes sense to wear or pack a warm scarf and a beanie, and gloves if you’re headed to Vancouver in cooler weather. If you’re hiking, wear your most comfortable outdoor clothes and opt for wool socks—and don’t forget a rain jacket and compact umbrella.

Dressing for the Seasons in Vancouver

The last month of Vancouver’s rainy season is March, so you’ll want to keep your rain jacket accessible and expect scattered showers if you’re in Vancouver in April or May. March is quite chilly with a low of 37℉ and a high of 51℉, and you can expect lows in the 50s in April and May, with May getting up to 64℉. A good pair of wool socks make a huge difference in colder Spring weather. 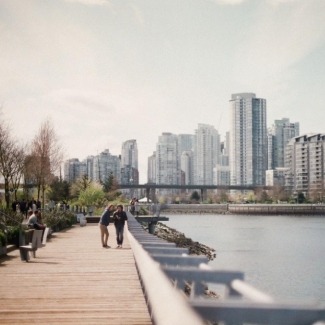 It rains the least in the summer in Vancouver, with 1.5-2 inches of rain depending on the month. Temperatures average between highs of 67℉ and 72℉, so while it’s comfortable, you’ll want to pack a light cardigan and have a way to dry off quickly if you decide to go swimming. Summer in Vancouver, B.C., is really lovely.

November has the most months of rain and snow, with 20 days out of the month on average. September at lower elevations has a low of 52℉ and high of 67℉, while November has a high of 50℉ and dips down to 38℉. Always plan for more layers if you’re headed up the mountain, and take a compact umbrella with you. Snug fleece jackets can be layered underneath a warm coat and over a workout shirt or thermal. 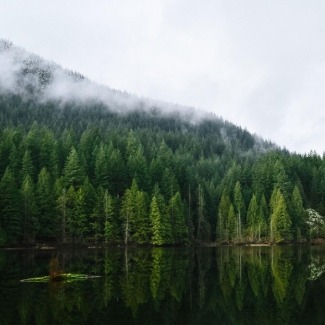 The west coast of Canada is the only place where the average temperature remains above freezing, and that goes for Vancouver, especially, where it doesn’t get below 34℉ on average. You’ll still want to bring a winter coat, a beanie, or ear warmers, and plan for lots of snow with snow boots and thermal underwear if you’re planning on skiing in the mountains.

Dressing Appropriately for the Activity – (Click to expand)
Hiking in the Summer: If you’re hiking in the summer in Vancouver, keep in mind that the temperature generally won’t get above the low 70s (℉), with cooler temperatures in the mountains. As such, you’ll want to pack layers like a fleece jacket and wear wool socks. And don’t forget to pack a compact umbrella and rain jacket.

Vancouver City Life: Whether you’re exploring cafes or the food scene in Vancouver, you can’t go wrong with comfortable outfits that layer well. Whether that’s a nice blouse or button down, jeans or chinos, comfortable sandals, or dress shoes, just think of how you’d dress downtown in any major city, and you’ll fit right in.

What NOT to Bring to Vancouver

What NOT to Wear in Vancouver – (Click to expand)
Similar to a lot of trips, packing anything that wrinkles easily is going to add time and energy. There’s always the possibility of ironing that linen top, but more likely than not, it will just take up space in your luggage. Additionally, formal wear probably isn’t needed unless you have a specific occasion on the itinerary. It’s best to pack clothes you’ll often wear and feel comfortable in.