Orlando attracts around 60 million visitors a year for good reason. It boasts Walt Disney World, the Universal theme parks, and SeaWorld just to name a few of its attractions. Nicknamed “The City Beautiful,” Orlando certainly offers much to enjoy.

I’ve put together an Orlando packing list to help you prepare for your trip, along with sections on what to wear in Orlando, what NOT to bring, and FAQs.

What to Pack for Orlando – 20 Essentials

What to Wear in Orlando

When planning what to wear for an Orlando trip, remember these two weather conditions: hot and muggy. After all, Florida is “The Sunshine State” and it certainly lives up to its name!

No matter what time of year you are visiting, you’ll want to pack a comfortable pair of shoes. Water-resistant shoes can be wise especially if you will be visiting a theme park.

Remember that Orlando is not immune to temperature fluctuations, so it is always wise to check that weather report right before you make those final adjustments to your packing list. In most cases, it never hurts to pack a light sweater or jacket for cooler evenings. 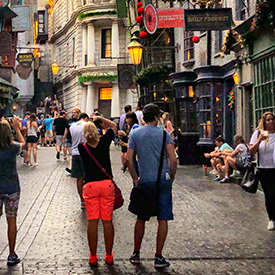 What WOMEN Should Wear on an Orlando Trip – (Click to expand)
Below is a sample women’s clothing list. (All items link to Amazon.com for your convenience).

Women should focus on lightweight, comfortable clothes that can be mixed and matched. Remember that your clothes are likely to get soiled fairly quickly (don’t forget, Orlando is muggy!) so you might find yourself even wanting to switch your t-shirt or tank top out at least once during the day.

Packing a lightweight jacket, comfortable closed-toe sandals, and a hat are also musts. You don’t want to have to pay top dollar to buy these items at a touristy gift shop.

What MEN Should Wear on Orlando Trip – (Click to expand)
Below is a sample men’s clothing list. (All items link to Amazon.com for your convenience).

Men should plan for hot temperature conditions, and bring a variety of lightweight, moisture-wicking clothing. A variety of shorts and lightweight shirts that can be switched out and mixed-and-matched are a good bet.

Don’t forget a hat to shield your eyes from the sun. Pack a sweater in case the evenings get chilly. Choose comfortable shoes that will get you from A to Z without your feet paying the price.

Packing for the Seasons in Orlando

Spring is many people’s favorite time of year to visit Orlando for its cooler temperatures. However, in March, averages can even start to delve in the 50-degree range, so if you feel like that’s colder than you are comfortable with, be sure to be prepared with a lightweight sweater for evenings. Temperatures average between 57°F to 88°F (14°C to 31°C)

Orlando temperatures in the summer are famously hot and humid, so be sure to pack at least a couple of pairs of shorts that you can mix-and-match with short-sleeved shirts. Don’t forget to pack closed-toe sandals which are better for avoiding stubbed toes, and comfortable sneakers. Temperatures average between 73°F to 91°F (23°C to 33°C)

While rain knowns no time restrictions, it is during the Fall months (and as early as August) that you are most likely to encounter rainy weather in Orlando. Water-resistant shoes are a wise bet. Temperatures will be cooling off so you might want to consider longer layers. Overall, November in Orlando is still relatively warm with the average low falling around 60 degrees — that’s pretty warm! It never hurts to pack layers—a light scarf and sweater are solid basics to start with. Temperatures average between 59°F to 90°F (15°C to 32°C)

Orlando is warm year-round, so you’ll still enjoy daytime averages of the 70s and 80s even throughout the winter. Perhaps more than any other time of year, though, it is wise to pack for cold contingencies. Evening lows of 30-degrees are not unheard of! The good news is you don’t have to worry about snow. Consider packing a warm sweater, as the temperature extremes during Orlando winters can be almost as unpredictable as your favorite roller coaster ride. Temperatures average between 52°F to 75°F (11°C to 24°C)

Dressing Appropriately for the Activity – (Click to expand)
Theme parks: A day at a theme park can be incredibly fun, but if you aren’t dressed for it, it can be incredibly uncomfortable too. Check the weather forecast for the day and make sure you dress appropriately and consider what the evenings will feel like. Comfortable shoes are also a must, and avoid clothes that chafe.

Waterpark/pool: The odds are high that you will be visiting a swimming pool or even the beach while you are in Orlando, so be sure to pack your favorite swimsuit, sandals, and swimwear coverup.

Nightlife: Orlando has some fantastic cuisine to offer, from themed restaurants to epic seafood. Be sure to pack for at least one nice dinner out. A stylish sundress is always a good idea, but depending on where you are going, jeans, a cute top (or a dressier shirt) are always solid options as well.

What NOT to Bring to Orlando

What NOT to Wear on a trip to Orlando – (Click to expand)
Heavy clothing: No matter what time of year you are traveling to Orlando, you are likely to encounter humidity. Humidity and heavy layers will just make you plain uncomfortable.

Open-toe shoes: Open-toe shoes can be a tricky thing when traveling—your favorite cork sandals can be great for traversing the neighborhood around your hotel or walking to the nearest trendy cafe. But when it comes to theme parks, they can be a no-go proposition. They shouldn’t be crossed off your list necessarily, just choose how you wear them wisely.

FAQs About Travel to Orlando