Santa Fe is situated at 7,000 feet in the foothills of the southern Rocky Mountains. With sweeping inclines, desert landscape, and rich cultural history and art scene, Santa Fe is one of those magical places. They don’t call New Mexico The Land of Enchantment for nothing. I’ve put together a list of all the things you’ll want to make sure to not forget, what to wear in each season, as well as a list of what NOT to bring.

What to Pack for Santa Fe- 17 Essentials

Other Santa Fe Packing List Items Not to Forget

What to Wear in Santa Fe

While Santa Fe can get very warm in the summer, the nice thing is it won’t really get above 90℉. You’ll still want to pack lightweight, breathable layers, but generally, you can wear whatever you feel comfortable in at home. If you’re traveling to Santa Fe in the winter, you’ll need to plan for lots of snow, and layer accordingly. 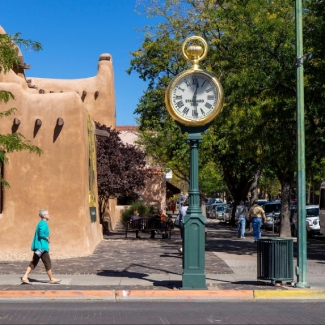 What Should Women Wear in Santa Fe? – (Click to expand)
Below is a sample women’s clothing list. (All items link to Amazon.com for your convenience).

Santa Fe is warm and sunny in the summer, so you’ll want to make sure you pack breathable, lightweight layers, especially if you’re hiking. Bike shorts with pockets pair nicely with a crop workout tank or a loose, breathable workout tank. Make sure you’ve got sturdy hiking boots or athletic shoes with traction.

While shopping in the Plaza or at the Farmer’s Market, dress however you’re most comfortable, with a summer dress or a nice top and jeans. Packing space tip: find a swimsuit cover-up that can double as a light cardigan, the perfect accessory for any outfit. If you’re in Santa Fe in the winter, make sure you’ve got your snow gear and winter coat with you.

What Should Men Wear in Santa Fe? – (Click to expand)
Below is a sample men’s clothing list. (All items link to Amazon.com for your convenience).

Santa Fe is warm in the summer and cold and snowy in the winter. If you’re out hiking in the summer, make sure you’ve got a hat and a packable rain jacket for possible summer afternoon thunderstorms.

If you’re out at a nice dinner in the Plaza, you can always opt for a button-down, chino pants, and dress shoes. When you’re skiing, make sure you have your base layers and proper snow gear.

Dressing for the Seasons in Santa Fe

Santa Fe is semi-arid with four seasons, so even though it’s somewhat of a desert climate, you’ll still get a lot of snow in the winter. Averaging 325 sunny days a year, prepare for lots of blue skies and sunshine, as well as the occasional mountain summer thunderstorm. 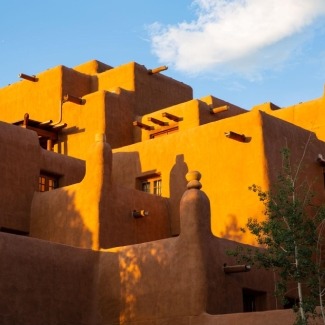 Temperatures in July and August generally range from 80-90℉. It only gets above 90℉ 3-6 days out of the year. The rainy season is generally July-August with those signature mountain afternoon thunderstorms, so make sure to bring your rain jacket with you. 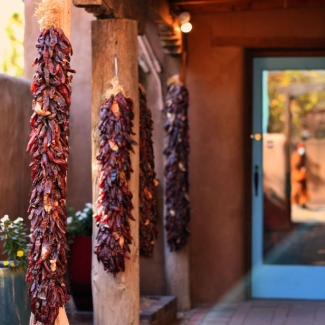 Snowy season in Santa Fe is generally from November through April, with an average of 32 inches of snow in town and up to 300 inches in the mountains. Temperatures dip down to 17℉ in January.

Dressing Appropriately for the Activity – (Click to expand)
Summer Hiking:
If you’re hiking in the summer in Santa Fe, you’ll want to make sure you have plenty of water, snacks, and sunscreen even though temperatures won’t get as hot as Arizona or Texas, the higher elevation and similar desert landscape can still easily be hotter than anticipated.

Both men and women can wear quick-dry pants or shorts, and athletic tops. Whether or not you opt for long-sleeves with UV protection is up to each person. Sturdy hiking boots are recommended for steep inclines.

Winter Skiing:
If you’re skiing in Santa Fe, you’ll want to make sure you’ve brought your thermal base layers, insulated bib overalls, and winter coat. Check the temperatures and estimated snow ahead of time, and plan accordingly.

Sightseeing:
If you’re checking out the art scene in Santa Fe, it’s generally more laid back, so feel free to dress however you feel comfortable. If you enjoy dressing up a bit, pair a bohemian skirt with your favorite tank top, or pair your favorite button-down with chinos.

What NOT to Bring to Santa Fe

What NOT to Wear in Santa Fe – (Click to expand)
Unless you are attending a more formal event, you can leave your formal dresses and suits at home. Just like any trip, don’t bring or wear anything you don’t love when you try it on at home.